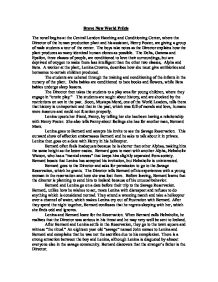 Brave New World Pr�cis The novel begins at the Central London Hatching and Conditioning Center, where the Director of the human production plant and his assistant, Henry Foster, are giving a group of male students a tour of the center. The boys take notes as the Director explains how the plant produces as many identical human clones as possible. The Delta, Gamma and Epsilon, three classes of people, are conditioned to love their surroundings, but are deprived of oxygen to make them less intelligent than the other two classes, Alpha and Beta. A worker at the plant, Lenina Crowne, describes how she must give antibiotics and hormones to certain children produced. The students are ushered through the training and conditioning of the infants in the nursery of the plant. Delta babies are conditioned to hate books and flowers, while Beta babies undergo sleep lessons. The Director then takes the students to a play area for young children, where they engage in "erotic play." The students are taught about history, and are shocked by the restrictions on sex in the past. Soon, Mustapa Mond, one of the World Leaders, tells them that history is unimportant and that in the past, which was full of morals and love, humans were insecure and could not function properly. ...read more.

Bernard discovers that the stranger's father is the Director. John and Bernard talk of his rejection from the Savage society because of his appearance and mother's actions. He is ashamed she has slept with so many men. Pope', one of his mother's men, brings John's mother, Linda, mescal and also brings John a book of Shakespeare, which he reads religiously. Bernard invites John to the Brave New World, and John agrees only if Linda can also come. Lenina returns from her long and horrific day, takes soma and is knocked out for eighteen hours. Bernard leaves Lenina by herself and takes a helicopter to Santa Fe, where he visits Mustapa Mond and receives permission to bring back John and Linda. Lenina had invited John to see her, but she is on "holiday" when he arrives. Upon Bernard's return to the Brave New World, the Director expects to dismiss him in front of all of the factory workers as an example. Bernard invites Linda and John into the room, and the Director is so embarrassed by his family that he resigns and Bernard is able to stay. Bernard uses John's popularity to become more accepted into society. As this occurs, Linda continually takes soma "holidays" for her depression, and these trips will eventually kill her. ...read more.

Mond discusses his views of society, explaining why things like books are banned to promote consumerism and modern values, and to maintain social stability. Apalled, John feels the citizens aren't proper human beings. He suggests creating only alphas, but Mond explains that over half of the workers would be unhappy doing degrading work. Mond informs Bernard and Helmholtz that they will be exiled. Bernard begs not to be sent away, and Helmholtz accepts without protest. Mustapa Mond and John argue about how religion is only necessary when people need a reason to keep faith, but in the Brave New World, there is no unhappiness, for they have soma, and there is no old age because they keep everyone young. Bernard and Helmholtz leave John, and, although John requests to go to the island with them, Mond tells him no and says that he wants to continue the experiment that he's using John for. John decides to live on his own in the countryside where he performs rituals of self-punishment. One day, he is discovered, and reporters come to visit him. John soon becomes famous, and he sends visitors away by force. Lenina comes to him with open arms, but he just insults and whips her. After a crowd encourages him, he increases the whipping, and soon they are all stupefied by soma. The next morning when John awakens he is so upset that he hurt Lenina that he hangs himself. ...read more.