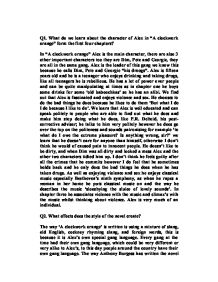 Q1. What do we learn about the character of Alex in "A clockwork orange" form the first four chapters? In "A clockwork orange" Alex is the main character, there are also 3 other important characters too they are Dim, Pete and Georgie, they are all in the same gang. Alex is the leader of this gang we know this because he calls Dim, Pete and Georgie "his droogs". Alex is fifteen years old and he is a teenager who enjoys drinking and taking drugs, like all teenagers he is rebellious. He has a lot of power over people and can be quite manipulating at times as in chapter one he buys some drinks for some 'old baboochkas' so he has an alibi. We find out that Alex is fascinated and enjoys violence and s*x. He chooses to do the bad things he does because he likes to do them 'But what I do I do because I like to do'. We learn that Alex is well educated and can speak politely to people who are able to find out what he does and make him stop doing what he does, like P.R. ...read more.

Alex is very much of an individual. Q2. What effects does the style of the novel create? The way 'A clockwork orange' is written is using a mixture of slang, old English, cockney rhyming slang, and foreign words, this is because it is Alex's own special gang language. Every gang at the time had their own gang language, which could be very different or very alike to Alex's, to this day people around the country have their own gang language. The way Anthony Burgess has written the novel has made the reader feel very involved in the violence; I sometimes feel that I have actually witnessed Alex doing the dreadful things he does. The writer has achieved this by preaching to the reader 'O my brothers'. The word brother makes you feel part of his gang, when he is speaking to his other gang members or describing something he is doing or done, he will almost every time say 'my brother'. The way Alex describes things he likes doing he does in so much detail and it really makes the reader feel the same way Alex does about what he likes. ...read more.

There is also a lot of vandalism in the area as the 'old municipal painting' in his flatblock had been graffiti on by people drawing rude things on it. The painting was to show the society of the area and it describes the painting as 'vecks and ptitsas very well developed, stern in the dignity of labour, at workbench and machine with not one stitch of platties on their well-developed plots.' This is saying that the people in the society are working class however they are proud of what they do. I feel that there isn't a lot of trust in the area as well and that everyone is frightened of each other because in chapter two the woman at the door had the chain on the door so it is obvious that she is aware of all the crime in the area and is also scared. Although in chapter four the two young girls did not know about the danger of being around Alex maybe this is because they were so vulnerable or they were not aware of the danger in the area. ...read more.