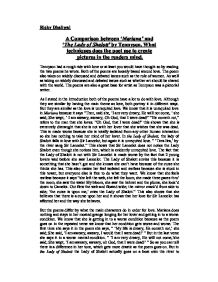 A comaprison between mariana and the lady of shallot

Ricky Dhaliwal A Comparison between 'Mariana' and 'The Lady of Shalott' by Tennyson. What techniques does the poet use to create pictures in the readers mind. Tennyson had a rough ride with love or at least you would have thought so by reading the two poems he wrote. Both of the poems are loosely based around love. The poem also takes on widely discussed and debated issues such as the role of women. As well as taking on widely discussed and debated issues such as whether art should be shared with the world. The poems are also a great base for artist as Tennyson was a pictorial writer. As I stated in the introduction both of the poems have a lot to do with love. Although they are similar by having the main theme as love, both portray it in different ways. But they are similar as the love is unrequited love. We know that it is unrequited love in Mariana because it says "Then, said she, 'I am very dreary, He will not come, ' she said; She wept, ' I am aweary, aweary, Oh God, that I were dead!" ...read more.

While she is on the boat the weather changes to autumn. The poem now takes a depressing and miserable tone. As soon as she reaches Camelot she dies. In this part of the poem Tennyson especially uses pathetic fallacy. He uses pathetic fallacy by having the weather change to the weather that is typical of autumn. Autumn symbolises the end of life such as leaves falling off trees so it is appropriate to have autumn weather just before the Lady of Shallot dies. The fact that the Lady of Shallot dies for love makes it more romantic. In both the poems the main characters are women. I think that both poems make references to the role of women in society. In both of the poems both women are trapped and can't escape. I think that this is trying to suggest that in society at the time Tennyson was writing, he thought that women were trapped by the thought that a woman's place was in the home. I think that Tennyson is trying to make a point that at the time women were doomed by what is expected of them. ...read more.

Another poetic technique that Tennyson uses is personification. He does this by putting "marish-mosses crept." This is personification because moss does not creep. So this suggests that everything around her is closing in on her. So this implies that she is paranoid. Another technique Tennyson uses is alliteration, for example "wooing winds". He used alliteration to help create the setting which is creating Marian's state of mind. Descriptive language is another technique Tennyson uses to help show Mariana's state of mind. He does this to give the reader the most vivid image of Mariana's state of mind. He does this very well because as soon as we start reading we realise that the setting is very dark, gloomy, sad, depressing and monotonous. Tennyson also uses time changes. He does this by swapping from day to night and the other way round. But Mariana doesn't really change the way she feels. So no matter what time it is nothing changes for Mariana so this gives the impression that her life is really monotonous. One main and obvious techniques Tennyson uses is repetition. I have already stated this early in the essay. But the repetition of these lines again gives the impression that her life is really boring and monotonous. ...read more.