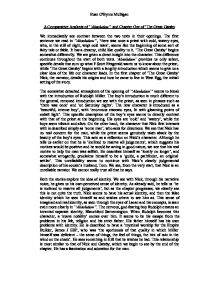 A Comparative Analysis of ''Absolution'' and Chapter One of 'The Great Gatsby We immediately see contrast between the two texts in their openings. The first sentence we read in ''Absolution'', 'there was once a priest with cold, watery eyes, who, in the still of night, wept cold tears', seems like the beginning of some sort of fairy tale or fable. It has a dreamy, child like quality to it. 'The Great Gatsby' begins somewhat differently. We are given a direct insight into the character. This difference continues throughout the start of both texts. 'Absolution' provides us only select, specific details that sum up what F Scott Fitzgerald wants us to know about the priest, while 'The Great Gatsby' begins with a lengthy introduction which seems to give us a clear idea of the life our character leads. In the first chapter of 'The Great Gatsby' Nick, the narrator, details his origins and how he came to live in West Egg, the initial setting of the story. The somewhat detached atmosphere of the opening of ''Absolution'' seems to break with the introduction of Rudolph Miller. The boy's introduction is much different to the general, removed introduction we see with the priest, as seen in phrases such as 'there was once' and 'on Saturday nights'. ...read more.

When Rudolph becomes this character, a 'suave nobility' comes over him. It seems to be his escape from the problems in his life, religion and his strict father. His father himself has his own problems with identity. He is described to have a 'mystical worship for the Empire Builder, James J Hill', who was 'the apotheosis of that quality in which Miller himself was deficient - the sense of things, the feel of things, the hint of rain in the wind on the cheek'. He sees something in Hill that he wishes he had. This relationship is most similar to that of Nick and Gatsby, which we begin to see by the end of the chapter. He has a fascination and adoration for the man. Another area we see explored in both stories is father-son relationships. 'The Great Gatsby' begins with Nick giving us a quote from his father, which clearly displays some degree of paternal respect. He values what his father has told him. Rudolph seems also to have this sense of paternal respect; his father is a major source of authority to him. Despite the harsh discipline we see that Carl Miller exercises over Rudolph, we are told that 'he was proud of Rudolph down to his heart' and that he was 'beginning to feel truly as well as formally sorry for what he had done'. ...read more.

We see in both texts Fitzgerald displays a similar style is his use of imagery and light. This is most notably seen in his use of colour symbolism. At the end of the first chapter of The Great Gatsby, Nick describes 'the silhouette of a moving cat across the moonlight', followed by the emergence of 'a figure' who 'emerged from the shadow of my neighbour's mansion' and stood looking at 'the silver pepper of the stars' Nick specifically describes 'a single green light, minute and far away' as he looks out across the water. This initially seems to be symbolic of Gatsby's desires, specifically for Daisy, but as the book progresses we see it is symbolic of anything distant that you desire. The use of 'green' is important, as green is the colour we associate with envy and desire. The same use of light and colour is apparent in 'Absolution'. We see this in the priest's dying speech at the end of the story. He refers several times to 'glimmering' and 'twinkling' lights as he talks about amusement parks and parties, the vibrant lifestyle he never had. The lifelessness of his religious life is further emphasised by the description of 'flat bloomless vines and the pale echoes of flowers' outside the church. There is no colour, no vibrancy or vitality. Euan O'Byrne Mulligan ...read more.