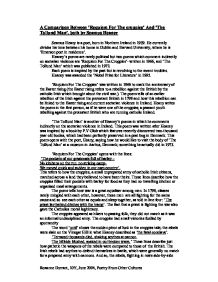 A Comparison Between 'Requiem For The croppies' And 'The Tollund Man', both by Seamus Heaney

A Comparison Between 'Requiem For The croppies' And 'The Tollund Man', both by Seamus Heaney Seamus Heany is a poet, born in Northern Ireland in 1939. He currently divides his time between his home in Dublin and Harvard University, where he is 'Emerson poet in residence'. Heaney's poems are rarely political but two poems which comment indirectly on sectarian violence are 'Requiem For The Croppies'- written in 1966, and 'The Tollund Man' which was published in 1972. Each poem is inspired by the past but is revolving to the recent troubles. Heaney was awarded the 'Nobel Prize for Literature' in 1995. 'Requiem For The Croppies' was written in 1966 to mark the anniversary of the Easter rising (the Easter rising refers to a rebellion against the British by the catholic Irish which brought about the civil war.). The poem tells of an earlier rebellion of the Irish against the protestant British in 1798 and how this rebellion can be linked to the Easter rising and current sectarian violence in Ireland. Heany writes the poem in the first person, as if he were one of the croppies; a peasant youth rebelling against the protestant British who are running catholic Ireland. 'The Tollund Man' is another of Heaney's poems in which he comments indirectly on the sectarian violence in Ireland. ...read more.

And so, the rebels, fighting in rows side-by-side (like terraces), were slaughtered. The idea of the 'blushing' hillside, gives the idea of how blood was spilt on the land and giving it the red, 'blushing' appearance. The croppies were buried without 'shroud or coffin'; this explains how the croppies were given a mass burial with no ceremony or funeral rites which is very important to the catholic religion. 'The barley grew up out of the grave. This line has a lot of meaning in the poem, the croppies were buried in the clothing they wore and the barley from their coats literally took root and grew, this implies that you can defeat an army but the spirit of resistance lives on. 'The Tollund Man' is divided into three parts. The first part of the poem opens with: 'Some day I will go to Aarhus To see his peat-brown head, The mild pods of his eyelids, His pointed skin cap. This first verse expresses Heaney's wish to visit the Tollund man in Aarhus, Denmark, he has only seen photographs of the body and wants to see it in person. Heany describes the 'Tollund man' as having a 'peat-brown head' this is because when the body was discovered the skin was stained brown from the peat. ...read more.

The poem also features a complex rhyme scheme of ABABCDCD EFEFEF. The dashes on the third line regarding the croppies' feeding habits add parenthesis (conversation aside). Heany uses a few metaphors (e.g. 'terraced thousands' 'hillside blushed') to add imagery to this piece of writing and the antithesis of 'shaking scythes at cannon' is a good contrast to use when comparing the weak to the strong. 'The Tollund Man' is written in a conversational tone and comprises of several quatrains per section and it has no rhyme scheme. The poem uses metaphors to describe the shape of the eyes; 'pods' allows the reader to visualise a thin layer containing some sort of round object e.g. a pea pod. The paradox 'unhappy and at home' is an ironic paradox relating to his how he has become accustomed to killing around him yet it still makes him sad to know it is going on. The oxymoron 'sad freedom' is ironic because you wouldn't tend to use two words which involve opposite emotions to be next to each other in descriptive writing. I prefer 'Requiem for the Croppies' because I find it more dramatic and moving. The pivot in the story adds a thrill to the tale and it is not as long and cryptic as 'The Tollund Man'. ?? ?? ?? ?? Roxanne Durrant, 10Y, June 2004, Poetry From Other Cultures ...read more.