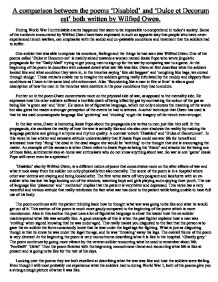 A comparison between the poems 'Disabled' and 'Dulce et Decorum est' both written by Wilfred Owen.

A comparison between the poems 'Disabled' and 'Dulce et Decorum est' both written by Wilfred Owen. During World War I unthinkable events happened that seem to be impossible to comprehend in today's society. Some of the incidents encountered by Wilfred Owen have been expressed in such an apposite way that people who have never experienced trench warfare, can emphasize with the sordid and un-palatable conditions and treatment that the soldiers had to suffer. One soldier that was able to express his emotions, feelings and the things he had seen was Wilfred Owen. One of his poems called 'Dulce et Decorum est' is mainly aimed towards a woman named Jessie Pope who wrote jingoistic propaganda for the "Daily Mail" trying to get young men to sign up for the war by comparing war to a game. At the beginning of the poem he describes with colossal detail what war life was like. Owen at first describes what the soldiers looked like and what condition they were in, in the trenches saying 'like old beggars' and 'coughing like hags, we cursed through sludge.' ...read more.

In the propaganda, she sanitises the reality of how the war is actually like and she also over shadows the reality by making the language patriotic and giving it a rhyme and rhythm quality. A contrast to both 'Disabled' and 'Dulce et Decorum est'. In this verse he has a bitter and sarcastic attitude understandably that if Jessie Pope could see war life for herself and witnessed how they 'flung' the dead in the dead wagon she would be 'writhing' to the thought that she is encouraging the matter. An example of this sarcasm is when Owen refers to Jessie Pope as being his 'friend' and attacks her for being one of those false, sentimental stay-at-home war enthusiasts who do not know anything about war. So war is one 'game' Jessie Pope will never even be a spectator! 'Disabled' also by Wilfred Owen, is a different nature of poem that concentrates more on the after effects of war and what it took away from the soldier not only physically but also mentally. ...read more.

This really makes you disgusted to the fact that the person who gave the ex-soldier the form consciously knew that he was under the legal age for fighting. What is just as disgusting though is that he knew he was under the legal the age, and he was 'throwing' away his legs. The overall theme of the poem is very diverse! At the beginning the poem is very monochrome describing what it is like in the hospital. 'Ghastly grey.' The poem continues by going more vibrant by the veteran soldier recounting what he used to remember about life. 'Football!' 'Girls!' Then the poem finishes with the beginning monochrome theme and recounting what life is like at present and is going to be like for the rest of his days. Looking over the poems they are both excellent at describing what the war was like and how the soldiers were feeling. Even though I will most probably not experience what the soldiers had to during World War 1, both of the poems give you a strong enough picture of what it was like. ...read more.