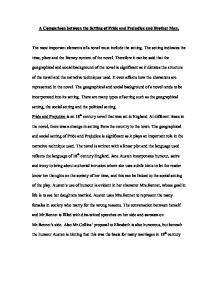 A Comparison between the Setting of Pride and Prejudice and Brother Man.

A Comparison between the Setting of Pride and Prejudice and Brother Man. The most important elements of a novel must include the setting. The setting indicates the time, place and the literary context of the novel. Therefore it can be said that the geographical and social background of the novel is significant as it dictates the structure of the novel and the narrative techniques used. It even affects how the characters are represented in the novel. The geographical and social background of a novel tends to be incorporated into its setting. There are many types of setting such as the geographical setting, the social setting and the political setting. Pride and Prejudice is an 18th century novel that was set in England. At different times in the novel, there was a change in setting from the country to the town. The geographical and social setting of Pride and Prejudice is significant as it plays an important role in the narrative technique used. ...read more.

The setting of the novel also influenced the method of introduction for each character. Austin's techniques reflected the 18th century English society. Her use of dialogue to introduce characters such as Bingley and Lady Catherine, her use of social events- namely b***s- to introduce Mr.Darcy and the Bingley sisters and the use of letters to introduce Mr.Collins all reflect the characteristics of Austen's society. The characterization of each character mirrored the geographical and social setting of the novel. Lady Catherine's behaviour clearly reflected the behaviour of the 18th century upper class while the Bennet's reflected the middle class. The use of irony by Austen is a way in which she brings out her views about 18th century England. "It is a truth universally acknowledged that men in possession of a good fortune is in need of a wife." Indeed this statement sets in motion the theme of marriage and the tone of irony. ...read more.

For example, Minette in Brother Man was a prostitute that he rescued from the street. The representation of relationships was also different. In Girlie and Papacita's relationship, love was absent and the relationship was purely physical and violent. They fought regularly and even their intimate relationship was so violent that in describing it Mais animal imagery. Also in Brother Man, Mais used a lot of biblical allusion; in fact Brother Man was represented as Christ. The plot of Brother Man focused on the Rastafarian movement and the everyday life in society. Brother Man was a representation of good versus evil while Pride and Prejudice was about first impressions. The social and geographical background differs greatly in both novels; however they serve their purpose in each novel and are significant. In Pride and Prejudice the social background brought out the theme of marriage and money while in Brother Man, the social background brought out the theme of good versus evil and the consciousness movement. ...read more.