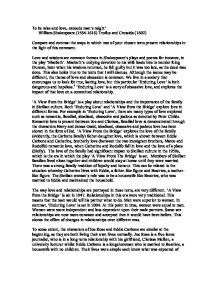 To be wise and love, exceeds man's might' William Shakespeare (1564-1616) Troilus and Cressida (1602) Compare and contrast the ways in which two of your chosen texts present relationships in the light of this comment. Love and wisdom are common themes in Shakespeare's plays and poems for instance, in the play 'Macbeth'. Macbeth's undying devotion to his wife leads him to murder King Duncan, later when his wisdom returned, he felt guilty but it was too late, as the deed was done. This also holds true to the texts that I will discuss. Although the issues may be different, the theme of love and obsession is common. We live in a society that encourages us to look for true, lasting love, but this particular 'Enduring Love' is both dangerous and hopeless.1 'Enduring Love' is a story of obsessive love, and explores the impact of that love on a committed relationship. 'A View from the Bridge' is a play about relationships and the importance of the family in Sicilian culture. Both 'Enduring Love' and 'A View from the Bridge' explore love in different forms. For example in 'Enduring Love', there are many types of love explored such as romantic, familial, idealised, obsessive and jealous as denoted by Peter Childs. ...read more.

He becomes attracted to Joe who is highly motivated and has clear aims in life. Jed becomes infatuated by Joe. This demonstrates a different kind of love, as Jed is not a figure of authority; he has no control over Joe. However, Eddie Carbone realises that he is losing his control over Catherine because she begins spending more time with Rodolfo and even implies that Rodolfo only goes out with Catherine because he wants to get a visa to stay in New York. Eddie tries to gain more control over Catherine, even though he is aware that Eddie is losing his power due to new men coming in to Catherine's life. Jed stays hopeful throughout the novel that Joe will realise that he loves him and start a relationship. Jed feels that despite the fact that Joe is in a relationship with Clarissa, he really loves Jed. This is evident by the fact that Jed would wait outside Joe's house, waiting to catch a glimpse of him. Jed is completely oblivious to the fact that Joe doesn't want to start a relationship with him. This is evident by the thirty voicemail messages Jed leaves on Joe's answer phone. At the end of the play, 'A View From The Bridge', Eddie dies. ...read more.

This is particularly obvious when looking at Sicilian life, where it is the man who fights for honour. Evidently, these texts contain mostly male characters. In the two texts, there was always an obstacle in the marriage/relationship of two people. However, each text deals with the obstacle in a very different way. It is the impact of individual wisdom, passion and understanding that combines to produce the texts. Each text shows clearly human frailty and emotion when facing challenges in life. This is evident in 'Enduring Love' whereby Parry is the obstacle because Joe himself, becomes paranoid and Clarissa grows tired of the discussions about Jed Parry. This is also the case in 'A View from the Bridge' as the fact that Eddie now loves Catherine adds strain to the marriage of Beatrice and Eddie, which could make her the obstacle. In conclusion, the two texts support the view that it is not possible to be in love and be wise at the same time. Perhaps love is a kind of madness 2 and it may be unrealistic to expect people in love who care passionately about each other to be objective and wise. 2,000 words Foot Notes 1. An Advanced Guide to 'Enduring Love', Hodder and Stoughton, 2003 2. ...read more.