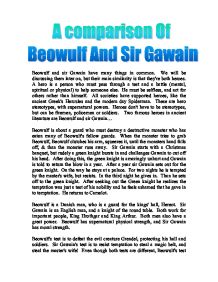 A comparison of Beowulf and sir Gawain

Beowulf and sir Gawain have many things in common. We will be discussing them later on, but their main similarity is that they're both heroes. A hero is a person who must pass through a test and a battle (mental, spiritual or physical) to help someone else. He must be selfless, and act for others rather than himself. All societies have supported heroes, like the ancient Greek's Hercules and the modern day Spiderman. These are hero stereotypes, with supernatural powers. Heroes don't have to be stereotypes, but can be firemen, policemen or soldiers. Two famous heroes in ancient literature are Beowulf and sir Gawain... Beowulf is about a guard who must destroy a destructive monster who has eaten many of Beowulf's fellow guards. When the monster tries to grab Beowulf, Beowulf clutches his arm, squeezes it, until the monsters hand falls off, & than the monster runs away. Sir Gawain starts with a Christmas banquet, but rudely a green knight bursts in and challenges Gawain to cut off his head. After doing this, the green knight is amazingly unhurt and Gawain is told to return the blow in a year. ...read more.

In the end, both succeeded, Grendel was killed, and sir Gawain received his blow, and stayed alive, but both had consequences. Beowulf's friends got killed, and later on Grendel's mother attacks him, and sir Gawain had been given a cut to his neck, and lost his honor. The test the heroes have to face, is often put up by a villain, and both have their fair share of villains. In Beowulf the enemy is a dark monster, which eats human and has super-strength, enough to bend iron. In Sir Gawain, the apparent villain is the green knight, who challenges sir Gawain to a grueling 'beheading contest'. After it's head falls off, he is not harmed, so he has some weird magical qualities. Both have supernatural powers and striking appearances, but the difference is that in sir Gawain and the green knight, the green knight is just the master of the kingdom in disguise, testing the nobility of King Arthur's knights, and not a mortal enemy. The main difference in the two poems is the language. ...read more.

The next example is in Middle English. ''Steppez into stelbawe and strydez alofte.'' In Modern English this means '', stepped into the stirrup and swung aloft.'' In Beowulf there is also a lot of alliteration. ''A sleeping soldier, savagely tore him,'' and one in Old English,'' Da com of more under misthleopum.'' And in Modern English. ''From off the moorlands misting fells.'' Also in Beowulf, and Old English, compound words are used and like in German, two words are linked to make another word. An example of this in Beowulf is ban-hus, or bone-house or body. Also woruld-Candul, World-candle or the sun. Both Sir Gawain and Beowulf are excellent poems with great plots. This is what drew me to the poems. Both have courageous heroes, with supernatural powers, and great willpower. In both the villains are also supernatural, and appear to be quite horrible. In both the heroes face a test, and come out mostly victorious, through trials and tribulations. This is a lesson to us all, and was written for society. It sets us an example, so we are selfless, and help others. We will succeed through struggle, and will get a reward. Heroes will always flourish in society, and they both educate and entertain us. ...read more.