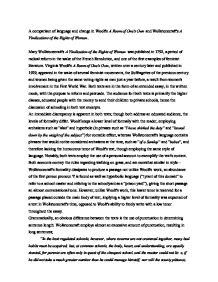 A comparison of language and change in Woolf's A Room of One's Own and Wollstonecraft's A Vindications of the Rights of Woman.

A comparison of language and change in Woolf's A Room of One's Own and Wollstonecraft's A Vindications of the Rights of Woman. Mary Wollstonecraft's A Vindication of the Rights of Woman was published in 1792, a period of radical reform in the wake of the French Revolution, and one of the first examples of feminist literature. Virginia Woolf's A Room of One's Own, written over a century later and published in 1929, appeared in the wake of several feminist movements, the Suffragettes of the previous century and women being given the same voting rights as men just a year before, a result from women's involvement in the First World War. Both texts are in the form of an extended essay, in the written mode, with the purpose to inform and persuade. The audience for both texts is primarily the higher classes, educated people with the money to send their children to private schools, hence the discussion of schooling in both text excerpts. An immediate discrepancy is apparent in both texts; though both address an educated audience, the levels of formality differ. ...read more.

The use of semi-colons to create verbose complex sentences are in direct contrast to Woolf's frequently shorter compound and complex sentences, despite even employing numerous semi-colons; "I need not say that what I am about to describe has no existence; Oxbridge is an invention; so is Fernham; 'I' is merely a convenient term for somebody who has no real being." Woolf's sentences, being shorter, remain more coherent than Wollstonecraft's frequently prolix passages, reflect a change in the standard of accessibility of texts, a 20th Century audience demanding concise information opposed to the 18th Century style of formal and complex language (indeed, the Romantic poetry movement of Wollstonecraft's era called for an end to the 'pretentious' and exclusive styles of writing favoured by authors of the time). Woolf also uses grammar in the lowering of her tenor, using the second person pronoun "you" to refer to the reader directly, something the Wollstonecraft text declines to do, as well employing the impartial first person "one" ("One can only give one's audience...") for an aloof, comedic effect. Though the use of 'one' may be expected in the archaic, more formal text of Wollstonecraft, it is omitted. ...read more.

However, their use differs; Wollstonecraft keeps the references short and aims to compliment the emotional appeals used in a persuasive text, whereas Woolf is highly literary and employs rhetoric in her descriptions, rich in modifiers, personification and latinate language; "To the right and left bushes of some sort, goldren and crimson, glowed with the colour, even it seemed burnt with heat, of fire. On the further bank the willows wept in perpetual lamentation, their hair about their shoulders." Woolf's inclusion of the semantic field in her rhetoric again suggests a more relaxed attitude towards language in the 20th Century compared to the 18th - considering the 'groundbreaking' natural philosophy and metaphysical aspects of Wollstonecraft's comtemporaries' poetry (the Romantics, such as Wordsworth, Keats and Shelley), it is hardly surprising there is a lack of richly decorated language and personification in Rights of Woman; as a persuasive text, it would not have been taken seriously. Lexically, further differences show a change in language. Wollstonecraft frequently makes use of emotional lexis, such as; "...the physical and moral evils that torment mankind, as well as of the vices and follies that degrade and destroy women..." This suggests that what influences language has also changed. ...read more.