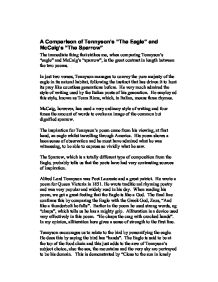 A Comparison of Tennyson's "The Eagle" and McCaig's "The Sparrow" The immediate thing that strikes me, when comparing Tennyson's "eagle" and McCaig's "sparrow", is the great contrast in length between the two poems. In just two verses, Tennyson manages to convey the pure majesty of the eagle in its natural habitat, following the instinct that has driven it to hunt its prey like countless generations before. He very much admired the style of writing used by the Italian poets of his generation. He employed this style, known as Terza Rima, which, in Italian, means three rhymes. McCaig, however, has used a very ordinary style of writing and four times the amount of words to evoke an image of the common but dignified sparrow. The inspiration for Tennyson's poem came from his viewing, at first hand, an eagle whilst travelling through America. His poem shows a keen sense of observation and he must have admired what he was witnessing, to be able to express so vividly what he saw. ...read more.

Hendry and others. He was considered one of Scotland's foremost poets of the 20th Century. McCaig's Sparrow is conversational in style. The ordinary language used in this poem is appropriate because the subject is considered to be common. Amongst some of the poetic devices he uses in this poem is repetition. This gets his point across very successfully. "To stalk solitary on lawns, to sing solitary in midnight trees, to glide solitary over gray atlantics" In verse two there are two main points to recognise. The first is his reference to other birds, by suggestion: "Peacocks stalk on lawns, Nightingales sing in the midnight trees, Albatrosses glide over the Atlantic." The second is that this is the only part of the poem that is not in conversational style. Immediately after this, McCaig reverts to the use of slang language. Line 11: "a punch up in the gutter", which is in direct contrast to the preceding formality. This relates to us how ordinary the sparrow is considered to be. ...read more.

The first very obvious connection is that of the subject matter, this is that they are both about birds. The second connection is that although the poems portray very different pictures, the writers have used the same poetic devices. As I have outlined with earlier examples, both alliteration and personification have been used by both poets. The eagle and the sparrow are both strong birds in their own fields. This comes across by the poets' use of descriptive vocabulary throughout. During my studies of these poems, I have become more and more impressed with the brilliance of Tennyson's descriptive powers. After six short lines, I have a vivid image of the eagle, ready to dive, "He watches from his mountain walls". However, due to McCaig's story of the poor sparrow, I feel this demonstrates that peoples' problems are not always as bad as they think. As an avid "twitcher", I thought I knew quite a lot about eagles and sparrows, but looking through the eyes of two eminent poets, I now know that I have a lot more to learn. ?? ?? ?? ?? ...read more.