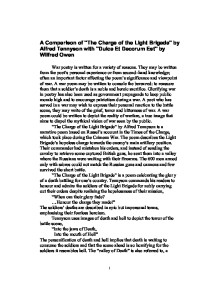 A Comparison of &quot;The Charge of the Light Brigade&quot; by Alfred Tennyson with &quot;Dulce Et Decorum Est&quot; by Wilfred Owen

A Comparison of "The Charge of the Light Brigade" by Alfred Tennyson with "Dulce Et Decorum Est" by Wilfred Owen War poetry is written for a variety of reasons. They may be written from the poet's personal experience or from second-hand knowledge; often an important factor affecting the poem's significance and viewpoint of war. A war poem may be written to console the bereaved: to reassure them that a soldier's death is a noble and heroic sacrifice. Glorifying war in poetry has also been used as government propaganda to keep public morale high and to encourage patriotism during a war. A poet who has served in a war may wish to express their personal reaction to the battle scene, they may write of the grief, terror and bitterness of war. A war poem could be written to depict the reality of warfare, a true image that aims to dispel the mythical vision of war seen by the public. "The Charge of the Light Brigade" by Alfred Tennyson is a narrative poem based on Russel's account in the Times of the Charge, which took place during the Crimean War. The poem describes the Light Brigade's hopeless charge towards the enemy's main artillery position. ...read more.

He is addressing the propagandists of the time such as Jessie Pope, who gave a false image of war to na�ve young men and encouraged them to fight without warning them of the horror of the battlefield. Wilfred Owen begins his poem by describing in the first stanza the overwhelming exhaustion of the marching soldiers. He uses vivid similes to depict the inhumane, feeble state of the soldiers; they are like "old beggars," and "hags,"- unusual descriptions for young soldiers. The stereotypical image of soldiers is of upright, smartly dressed men, not "bent double" and "under sacks." Owen creates a slow pace in the first stanza with lines running onto another and words such as "trudge" and "limped" suggesting the slow movement and weariness of the soldiers. The fatigue of the men is established through the portrayal of the soldiers' oblivion to their surroundings, they are "deaf to the hoots of gas shells." The mechanical action of the soldiers is exaggerated for emphasis; the men did not literally march asleep but were so exhausted it was a similar thing. The soldiers' fatigue affects all their senses as alcohol does and the are described as "drunk with fatigue." ...read more.

The construction of the poem is not as neat and ordered as the that of "The Charge of the Light Brigade" and similarly its view of war is not as clean and ordered as in Tennyson's poem. Tennyson was not present at the Charge of the Light Brigade; he received his information from Russel's article and wrote his poem specifically about the Charge. His view of war was therefore that of the general public and he had not experienced it so he was not able to judge the glory of war for himself. Wilfred Owen, however, fought in the First World War, one of the most terrible wars ever fought and had seen the dreadful waste of life that took place as millions of men died pointlessly. His experience made him bitter and his poetry is written from his own knowledge and judgement. "Dulce Et Decorum Est" is a war poem that can be applied to any war of any era for any side; it has a universal significance. Of the two poems I personally prefer "Dulce Et Decorum Est" as I consider Owen's honest portrayal of war a valuable insight which should be remembered and help people to understand the suffering of soldiers serving in war as this is too often forgotten. ?? ?? ?? ?? 5 1 ...read more.