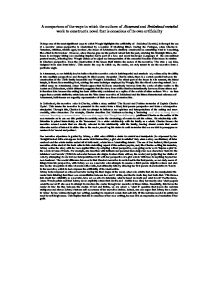 A comparison of the ways in which the authors of Atonement and Brideshead revisited work to construct a novel that is conscious of its own artificiality Perhaps one of the most significant ways in which Waugh highlights the artificiality of Brideshead Revisited, is through the use of a narrator whose perspective is constrained by a number of idealising filters. During the Prologue, when Charles is 'homeless, childless, middle-aged, loveless', the house of Brideshead is similarly constructed as something that is 'crouching, like a hind in the bracken'. However, when Charles goes on his pastoral retreat into the past, adorning his Nostalgic filters, the house is no longer hiding (as crouching implies) but is part of a 'new and secret landscape' (Language of the conventional pastoral mode), reflecting how Waugh wishes us to adjust our interpretation of the concealed location of the house in relation to Charles's perspective. Even the construction of the house itself mimics the nature of the narrative; 'The dome was false, designed to be seen from below'. This enacts the way in which we, the reader, are only meant to see the narrative from a particular angle. ...read more.

This means the narrative is presented to the reader from a fixed, first person perspective and from a retrospective standpoint. Through this, Charles is able to attempt to influence our opinions and interpretations of the setting and more crucially, other characters. For example, Charles describes Rex Mottram as having a 'hectoring zeal' akin to being that of someone 'thrusting a vacuum cleaner'. One can also argue that Waugh has deliberately positioned Charles as the author of his own memoirs so he can use this position to carefully order the chronology of events to suit his wishes. His relationship with Sebastian is poised immediately as the 'forerunner' to a wider relationship with the family as a whole. Charles focuses the narrative around events that are directly relevant to his relationship with the family, leaving absent events that would otherwise not be of interest to either him or the reader, enacting his desire to craft memories that we are told to presuppose as readers to be 'sacred and profane'. Our narrative experience is guided by Briony, a child who exhibits a desire to control and manipulate (As expressed by her 'straight backed dolls who appear to be under strict instruction), a ...read more.

Briony is also exposed as a flawed narrator during the final stages of the novel, where she admits that she has manipulated the reader into thinking that there was reconciliation between her and Robbie, and that in truth they had both died. This throws into doubt her reliability as a narrator, how are we able to determine what is based on truth and what is not? Furthermore, James Woods points out that Briony never explicitly states that Cecilia and Robbie have died, but merely asks 'what purpose would be served if' she were to attempt to convince the reader through her narrative of those claims. Essentially, this forces the reader to blur the line between the realms of fact and fiction, we are asked a 'what if' question that leaves the outcome ambiguous and shows Briony's intense self-awareness of her narrative choices. Indeed, one can argue that Briony has a desire to 'atone' for her actions through her writing, needing to construct events that suitably fit the outcome needed to satisfy her need for self-forgiveness. This implies that she is conscious of her own writing, because it is an expression and resolution of her guilt. ...read more.