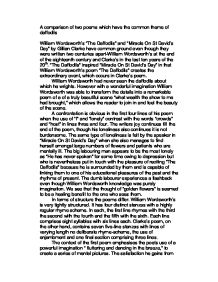 A comparison of two poems which have the common theme of daffodils William Wordsworth's "The Daffodils" and "Miracle On St David's Day" by Gillian Clarke have common ground even though they were written two centuries apart-William Wordsworth's at the end of the eighteenth century and Clarke's in the last ten years of the 20th. "The Daffodils" inspired "Miracle On St David's Day" in that William Wordsworth's poem "The Daffodils" creates the extraordinary event, which occurs in Clarke's poem. William Wordsworth had never seen the daffodils about which he wrights. However with a wonderful imagination William Wordsworth was able to transform the details into a remarkable poem of a of a truly beautiful scene "what wealth the show to me had brought," which allows the reader to join in and feel the beauty of the scene. A confrontation is obvious in the first four lines of his poem when the use of "I" and "lonely" contrast with the words "crowds" and "host" in lines three and four. The writers joy continues till the end of the poem, though his loneliness also continues it is not burdensome. ...read more.

The context of the first poem emphasises the poets use of a powerful imagination " fluttering and dancing in the breeze," to create a series of mental pictures. The satisfaction he gains from recreating the images in his mind fills "his hear with pleasure" Clarke's experience is also heart warming in that it involves many people. And is less about the poet herself than in her interest in the transforming power of poetry for another. In "The Daffodils" William Wordsworth's method is to recount an imaginary walk in which he floats above the country side metaphorically revealing the lightness of his mood he describes the location and the density of the daffodils and personifies them by saying the "tossing their heads in springy dance" and their beauty not only affects his beauty and heart but also the rest of nature around them "the waves beside them danced" he comments of he ability these daffodils have to raise human spirits and it is clear from the last two lines of the stanza three that at the time he was completely unaware of the massive impact the sight had on him and how he would in the future revisit this imaginary scene and take from it such strength and such happiness. ...read more.

William Wordsworth's is constantly happy and uplifting while Clarke's is at first cautious changing into a mood of wonder before the poem closes. William Wordsworth's mood is one of delight; Clarke's is one of unease and finally one of increasing awareness. Atmosphere differs in the way that the first poem quick with a sense of heaven like beauty that it is hard to leave "I gazed and gazed." Whereas Clarke's poem depends for affect on the tension between images of imprisonment and restriction and those of freedom like in the fifth stanza. In both poems the natural images come to the top. There is much sparkle, colour, and warmth while these are constant in William Wordsworth poem there is a contrast in Clarke's poem with images of "the insane". Both poems move at moderate pace "The Daffodils" shows a regular pattern and constant rhythm while the movement of "Miracle On St David's Day" is irregular and very much dependent on the story of the poem. Language is made to fit context well but William Wordsworth's language is typical of the early nineteenth centaury and Clarke's clearly belongs to the twentieth in both cases vocabulary and structure are relatively simple with both benefiting from frequent use of devices such as metaphors alliteration and hyperbole. ...read more.