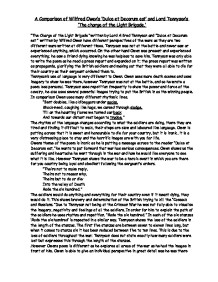 A Comparison of Wilfred Owen's 'Dulce et Decorum est' and Lord Tennyson's 'The charge of the Light Brigade.' "The Charge of the Light Brigade" written by Lord Alfred Tennyson and "Dulce et Decorum est" written by Wifred Owen have different perspectives of the wars as they are two different wars written at different times. Tennyson was not at the battle and never saw or experienced anything, which occurred. On the other hand Owen was present and experienced everything; he saw a friend dying knowing he was helpless to save him. Tennyson was only able to write the poem as he read a press report and expanded on it; the press report was written as propaganda, glorifying the British soldiers and making out that they were all able to die for their country as their sergeant ordered them to. Tennyson's use of language is very different to Owen. Owen uses more death scenes and uses imagery to show he was there, however Tennyson was not at the battle, and so he wrote a poem less personal. ...read more.

In order for him to explain the path of the soldiers he uses rhythm and repetition. "Rode the six hundred." In each of the six stanzas 'Rode the six hundred' is repeated in a similar way. Tennyson shows the loss of the soldiers in the length of the stanzas. The first five stanzas are between seven to eleven lines long, but when it comes to stanza six it has been reduced between five to ten lines. This is due to the loss of soldiers throughout the war; Tennyson does not state exactly how many soldiers were lost but expresses this through the length of the stanzas. However Owens poem is different as he explores all areas of the war as he had the images in front of him. Owen is able to give an individual perspective in great detail was he was there and he describes his friend as he wanted "the white eyes writhing in his face," and saw "his face hanging of a cart, like a devil's sick of sin," "if you could hear, at every jolt, the blood came gargling from the froth corrupted lungs." ...read more.

how will they cope. Tennyson shows them as a group but is unable to show an individual perspective as it is written from an article. By writing from a group perspective he is able to glorify them all. Overall Owen and Tennyson write in very different styles and with different perspectives to two different wars. Owens "Dulce et Decorum est" and Tennyson "The Charge of the Light Brigade" are both showing what happened in two different wars where you have a first person perspective and a 3rd persons perspective. Owen is trying to show that all young people may think it is a honour to die for your country, but it is also an horrific sight; Tennyson is trying to show that it is an honour and memorable to fight for your country. No one should be forced to fight in a war against his or her own will; war can cause a great deal of suffering and horrific consequences. Owen wants to show the people what war is really like and would like to help people and stop them from dieing however Tennyson just wants the young lads to go and fight and be honourable for their country never the less wants them to help. ...read more.

Some good analysis of structure and language and refers to the question throughout the essay. A clearer essay structure would be helpful for more detailed comparison but the writer clearly understands that the main difference between the two poems is the glorification of war with a piece of propaganda from a newspaper article versus Owen who experienced the horror of war first hand and the soldiers who died were his friends rather that faceless heroes.