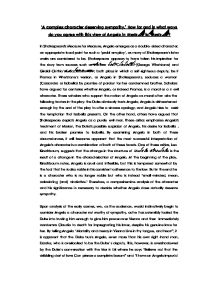 'A complex character deserving of sympathy'. To what extent do you agree with this view of Angelo in Measure for Measure?

'A complex character deserving sympathy.' How far and in what ways do you agree with this view of Angelo in Measure for Measure? In Shakespeare's Measure for Measure, Angelo emerges as a double-sided character; an appropriate focal point for such a 'problem play', as many of Shakespeare's later works are considered to be. Shakespeare appears to have taken his inspiration for the story from sources such as Promos and Cassandra (George Whetstone) and Giraldi Cinthio's Hecatommithi, both plays in which a self-righteous deputy, be it Promos in Whetstone's version, or Angelo in Shakespeare's, seduces a woman (Cassandra or Isabella) by promise of pardon for her condemned brother. Scholars have argued for centuries whether Angelo, or indeed Promos, is a moral or an evil character. Those scholars who support the notion of Angelo as moral often cite the following factors in the play: the Duke obviously trusts Angelo; Angelo is disheartened enough by the end of the play to offer a sincere apology; and Angelo tries to resist the temptation that Isabella presents. ...read more.

By telling Angelo "Mortality and mercy in Vienna Live in thy tongue, and heart", it is apparent that the Duke trusts Angelo, even more than his own right-hand man, Escalus, who is overlooked to be the Duke's deputy. This, however, is overshadowed by the Duke's conversation with the friar in I.iii where he says "Believe not that the dribbling dart of love Can pierce a complete bosom" and "I have on Angelo impos'd the office; Who may in th'ambush of my name strike home ... "; in both quotes we are led to believe that the Duke perhaps does not trust Angelo to the extent that is initially apparent. Instead, it appears to be part of a wider plan of which we are so far unaware. To make a moral judgement on Angelo at this stage of the play would be incorrect however; we have barely met him as a person, and only seen him in a brief exchange whilst accepting the position the Duke offers him. He is, however, "tyrannous" enough to promise Claudio's liberty in return for Isabella's virginity, such is his power in the Duke's place. ...read more.

This apology, especially with its placement at the end of the play, does leave the audience with a slightly more positive view of Angelo than would be had otherwise. Angelo's initial refusal of Isabella's offering whilst carrying out the Duke's plan is another factor of the play which would lead the audience to sympathising somewhat with Angelo and not considering him an entirely malicious character. Despite the evidence of these two points, however, I firmly believe that Angelo is mainly a character undeserving of sympathy, whose reputation amongst the masses is well-founded by his selfish actions and hypocritical nature, as we learn that he has committed a crime far worse than Claudio's - something apparently known by the Duke, who soliloquises at the end of Act III, saying "He who the sword of heaven will bear Should be as holy as severe". Although the best analysis of Angelo as a person would clearly be a combination of both malicious and beneficent, as many of the key characters in Shakespeare's 'problem plays' would best be described as, he does appear to be vastly a malevolent being, not worth of the audience's compassion. ...read more.