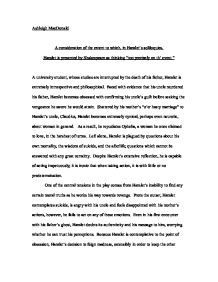 A consideration of the extent to which, in Hamlet's soliloquies, Hamlet is presented by Shakespeare as thinking

Ashleigh MacDonald A consideration of the extent to which, in Hamlet's soliloquies, Hamlet is presented by Shakespeare as thinking "too precisely on th' event." A university student, whose studies are interrupted by the death of his father, Hamlet is extremely introspective and philosophical. Faced with evidence that his uncle murdered his father, Hamlet becomes obsessed with confirming his uncle's guilt before seeking the vengeance he swore he would attain. Shattered by his mother's "o'er hasty marriage" to Hamlet's uncle, Claudius, Hamlet becomes extremely cynical, perhaps even neurotic, about women in general. As a result, he repudiates Ophelia, a woman he once claimed to love, in the harshest of terms. Left alone, Hamlet is plagued by questions about his own mortality, the wisdom of suicide, and the afterlife; questions which cannot be answered with any great certainty. Despite Hamlet's extensive reflection, he is capable of acting impetuously; it is ironic that when taking action, it is with little or no predetermination. One of the central tensions in the play comes from Hamlet's inability to find any certain moral truths as he works his way towards revenge. From the outset, Hamlet contemplates suicide, is angry with his uncle and feels disappointed with his mother's actions, however, he fails to act on any of these emotions. Even in his first encounter with his father's ghost, Hamlet doubts its authenticity and his message to him, worrying whether he can trust his perceptions. Because Hamlet is contemplative to the point of obsession, Hamlet's decision to feign madness, ostensibly in order to keep the other characters from guessing the motive for his behaviour, will lead him at times, perilously close to actual madness. However, Hamlet himself believes, "conscience does make coward of us all" and in comparison to other characters thinks: ...too precisely on the event- A thought which quartered hath but one part wisdom, And ever three parts coward. ...read more.

The rhyming couplet at the end of the soliloquy highlights Hamlet's decisive role to put his plan into action, as emphasises that Hamlet feels confident and assured with his plan. The soliloquy spoken by Hamlet in Act 3, scene i (58-90) is his most logical and powerful examination of the theme of moral legitimacy of suicide in an unbearably painful world. Hamlet poses the problem of whether to commit suicide as a logical question: "To be, or not to be." He then weighs the moral ramifications of living and dying. Is it nobler to suffer, "[t]he slings and arrows of outrageous fortune," passively or to seek to end one's suffering? Hamlet's attitude differs compared to previous soliloquies. He asks about death beyond religious considerations; the nature of his dilemma has changed, and Hamlet contemplates this with lucid simplicity. He compares death to sleep and thinks of the end to suffering, pain, and uncertainty it might bring, "[t]he heartache, and the thousand natural shocks / That flesh is heir to." Based on this metaphor, he decides that suicide is a desirable course of action, "a consummation / Devoutly to be wished." But, as the religious word, "devoutly," signifies, there is more to the question, namely, what will happen in the afterlife. Hamlet immediately realises as much, and he reconfigures his metaphor of sleep to include the possibility of dreaming; he says that the dreams that may come in the sleep of death are daunting, that they "must give us pause." He then concludes that the uncertainty of the afterlife, which is intimately related to the theme of the difficulty of attaining truth in a spiritually ambiguous world, is essentially what prevents all of humanity from committing suicide to end the pain of life. Hamlet realises that too close consideration, which exhausts all the relations and possible consequences of a deed, must cripple the power of action; as Hamlet expresses it: And thus the native hue of resolution Is sickled o'er with pale cast of thought; And enterprises of great pith and moment, With this regard. ...read more.

Hamlet has a highly cultivated mind, is a prince of royal manners, endowed with the finest degree of propriety, susceptible to noble ambition, and open in the highest degree to an enthusiastic admiration of that excellence in others in which he himself is deficient. Hamlets far fetched scruples are often mere pretexts to cover his want of determination - thoughts, as he says, which have, "but one part wisdom / And three parts coward." On the other hand, Hamlet proves himself right to some degree, as Laertes' swift action, leaves him in no better circumstances. In the aftermath of his father's murder, Hamlet is obsessed with the idea of death, and over the course of the play he considers death from a great many perspectives. He ponders both the spiritual aftermath of death, embodied in the ghost, and the physical remain of the dead, such as by Yorick's skull and the decaying corpses in the cemetery. Throughout, the idea of death is closely tied to the themes of spirituality, truth, and uncertainty in that death may bring the answers to Hamlet's deepest questions, ending once and for all the problem of trying to determine truth in an ambiguous world. And, since death is both the cause and the consequence of revenge, it is intimately tied to the theme of revenge and justice. The question of his own death plagues Hamlet as well, as he repeatedly contemplates whether or not suicide is a morally legitimate action in an unbearably painful world. Hamlet's grief and misery is such that he frequently longs for death to end his suffering, but he fears that if he commits suicide, he will be consigned to eternal suffering in h**l because of the Christian religion's prohibition of suicide. In his famous "To be or not to be" soliloquy, Hamlet philosophically concludes that no one would choose to endure the pain of life if he or she were not afraid of what would come after death, and that it is this fear which causes complex moral considerations which interferes with the capacity for action. ...read more.