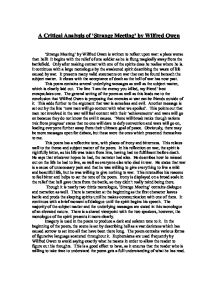 A Critical Analysis of 'Strange Meeting' by Wilfred Owen 'Strange Meeting' by Wilfred Owen is written to reflect upon war: a place worse than hell! It begins with the relief of one soldier as he is flung magically away from the battlefield. Only after making contact with one of the spirits does he realise where he is. It continues with a large monologue by the awakened spirit describing the waste of life caused by war. It presents many valid statements on war that can be found beneath the subject matter. It closes with the acceptance of death as the hell of war has now past. This poem contains several underlying messages as well as the subject matter, which is clearly laid out. The line 'I am the enemy you killed, my friend' best encapsulates one. The general setting of the poem as well as this leads me to the conclusion that Wilfred Owen is proposing that enemies at war can be friends outside of it. ...read more.

Though it is nearly two thirds monologue, 'Strange Meeting' contains dialogue and narration as well. There is narration at the beginning as the first character leaves battle and prods the sleeping spirits until he makes communication with one of them. It continues with a brief moment of dialogue until the spirit begins his speech. The majority of the subject matter and the underlying messages are stated in this monologue of an elevated nature. There is a shared viewpoint with the two speakers, however, the monologue of the spirit presents it more clearly. Imagery is used in the poem to produce a dark and solemn tone to it. In the beginning of the poem, the scene is set by describing hell as a vast darkness which has caused sorrow to set into all that have been there long. The poem contains various forms of figurative language scattered throughout it. Euphemisms are used frequently by Wilfred Owen to avoid saying exactly what he means in order to allow the reader to figure out his thoughts. ...read more.

It also helps in the flow of the poem. 'Strange Meeting' is a well-structured poem about death and war. By use of manipulation it provokes thought. It conveys its meanings well and argues the point that war is worse than hell as well as that enemies at war can be friends off the battlefield and that war is a convention that will go on because of the ignorance of those not involved in battle. Once the points made by Owen are found by the reader, they are well set out and clear. I have enjoyed analysing 'Strange Meeting' and finding many valid points to ponder on along the way. It was only after analysing the subject matter and use of language that I realised the rhyming nature of the poem. I found this a very clever use of words. I was impressed with the monologue by the spirit that produced valid statements about the evil and senselessness of war every few lines. This was a well-presented poem that I recommend to anyone who is willing to indulge into the themes presented by a poem. ...read more.

This essay cannot receive a higher grade as there are very few quotations which are essential when discussing poetic techniques used in the poem. However the writer does make some thoughtful comments showing an understanding of the poem and its message. Some interesting analysis of the rhyme scheme needs more poetic terminology.