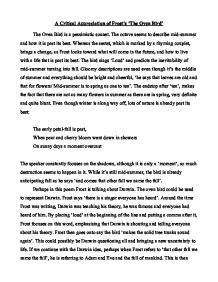 A Critical Appreciation of Frost's 'The Oven Bird'

A Critical Appreciation of Frost's 'The Oven Bird' The Oven Bird is a pessimistic sonnet. The octave seems to describe mid-summer and how it is past its best. Whereas the sestet, which is marked by a rhyming couplet, brings a change, as Frost looks toward what will come in the future, and how to live with a life that is past its best. The bird sings 'Loud' and predicts the inevitability of mid-summer turning into fall. Gloomy descriptions are used even though it's the middle of summer and everything should be bright and cheerful, 'he says that leaves are old and that for flowers/ Mid-summer is to spring as one to ten'. ...read more.

Around the time Frost was writing, Darwin was teaching his theory, he was famous and everyone had heard of him. By placing 'loud' at the beginning of the line and putting a comma after it, Frost focuses on this word, emphasising that Darwin is shouting and telling everyone about his theory. Frost then goes onto say the bird 'makes the solid tree trunks sound again'. This could possibly be Darwin questioning all and bringing a new uncertainty to life. If we continue with the Darwin idea, perhaps when Frost refers to 'that other fall we name the fall', he is referring to Adam and Eve and the fall of mankind. ...read more.

This is very characteristic of Frost's poetry, with Frost leaving the reader to make their own interpretation and decide for themselves. Although the tone of the last two lines is elegiac and 'diminished thing' sounds very negative, Frost also asks 'what to make' of it and this sounds more positive as though this is just a new, exciting challenge to face. The Oven Bird is also similar to Frost's other poetry because he uses nature to put across an idea. The Oven Bird is an unusual sonnet, Frost uses an old, accepted poetry style to express these new and bold ideas, the unconventional rhyme scheme also helps to emphasise these new ideas. This is another quality of Frost, to take a certain style of poetry and make it his own. By: Harriet Aldridge ...read more.