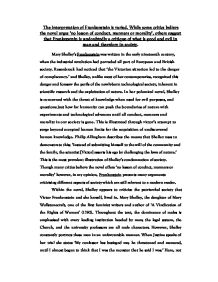 A Critique of Society in Mary Shelley's Frankenstein

The interpretation of Frankenstein is varied. While some critics believe the novel urges 'no lesson of conduct, manners or morality', others suggest that Frankenstein is undoubtedly a critique of what is good and evil in man and therefore in society. Mary Shelley's Frankenstein was written in the early nineteenth century, when the industrial revolution had pervaded all part of European and British society. Rosenbrock had noticed that 'the Victorian situation led to the danger of complacency.' and Shelley, unlike most of her contemporaries, recognized this danger and foresaw the perils of the newly-born technological society, inherent in scientific research and the exploitation of nature. In her polemical novel, Shelley is concerned with the threat of knowledge when used for evil purposes, and questions just how far humanity can push the boundaries of nature with experiments and technological advances until all conduct, manners and morality in our society is gone. This is illustrated through victor's attempt to surge beyond accepted human limits for the acquisition of undiscovered human knowledge. Philip Allingham describes the means that Shelley uses to demonstrate this; 'Instead of submitting himself to the will of the community and the family, the scientist [Victor] asserts his ego by challenging the laws of nature.' This is the most prevalent illustration of Shelley's condemnation of society. Though many critics believe the novel offers 'no lesson of conduct, manners or morality' however, in my opinion, Frankenstein presents many arguments criticising different aspects of society which are still relevant to a modern reader. ...read more.

However, Victor's dreams are abashed when what he has desired for so long, turns out to be a 'wretched daemon'. Therefore, Shelley is criticising how man is never satisfied and greed and obsessive ambition can ultimately end in ruin. Another aspect that Shelley criticises is the superficiality and narrow-mindedness of society. The innate insularity and treatment of the monster illustrates this explicitly. He is stoned by the villagers, and shot at when helping a man's drowning daughter. Men 'shrieked' at the sight of the monster merely because his appearance was different to theirs. Anne K Mellor comments on how Shelley 'wishes us to see that human beings typically interpret the unfamiliar, the abnormal and the unique as evil.' and how this is wrong, immoral and unjust. She is trying to make us aware of the constant hypocrisy within society. In contrast to the monster's horrendous treatment due to his ugly appearance, the beauty of Elizabeth and how she is plucked out of all the other children due to her 'angelic' features, and how Frankenstein is respected because he adheres to society's conventions, is quite important. Daniel J Webber described how Shelley 'asks the reader to re-evaluate their concepts about beauty and how it relates to evil'; The stark reality of the monsters horrid form and originally compassionate personality is juxtaposed with Frankenstein's shameful ambitions, yet respected persona to illustrate this point. Another example of society's pretentiousness as Shelley presents in the novel is the story of Safie's father. ...read more.

Shelley is criticising society's selfish, judgemental and indifferent attitude towards those who have problems or who are different and the devastating affects, especially those of loneliness and desolation, that can result from these attitudes and this is a predominant message in the novel. It is evident that Mary Shelley's Frankenstein does offer lessons of conduct, manners and morality. So much so, they can even be applied to contemporary society. Scientists appear to have learnt nothing from the novel, with the ever more real technological advances in cloning, IVF and stem-cell research. Albert Einstein had said over fifty years ago that 'It has become appallingly obvious that our technology has exceeded our humanity.', yet even in this past month, Cardinals have petitioned for politicians to abstain from voting on the Embryo Bill. What's more, in China, babies are abandoned and left to fend for themselves everyday, just like Frankenstein's monster. The patriarchal ideals are still in place, with the most important institutions in our society still controlled by men whether it be the church, the legal system or the medical profession; exactly what Shelley was imploring against. Furthermore, humanity has still not learnt what valuable human qualities are. Celebrities and models are acquiring fame and money purely for their beauty and some even without any 'real' job, and many of the kindest people are left to live in poverty; this is especially evident in our third world countries. Therefore, I believe that it is undeniable that the novel does in fact offer lessons in conduct, manners and morality and therefore the reader can undoubtedly learn a lot from Frankenstein. . ...read more.