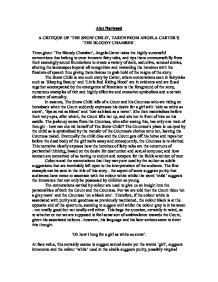 A CRITIQUE OF 'THE SNOW CHILD', TAKEN FROM ANGELA CARTER'S 'THE b****y CHAMBER'.

Alex Norwood A CRITIQUE OF 'THE SNOW CHILD', TAKEN FROM ANGELA CARTER'S 'THE b****y CHAMBER'. Throughout 'The b****y Chamber', Angela Carter takes the highly successful conventions that belong to once innocent fairy tales, and rips them unremorsefully from their seemingly sound foundations to create a variety of dark, seductive, sensual stories, altering the landscapes beyond all recognition and rewarding the heroines with the freedom of speech thus giving them license to grab hold of the reigns of the story. The Snow Child is one such story by Carter, where connotations seen in fairytales such as 'Sleeping Beauty' and 'Little Red Riding Hood' are in evidence and are fused together accompanied by the emergence of feminism to the foreground of the story, numerous examples of rich and highly effective and evocative symbolism and a certain element of sexuality. In essence, The Snow Child tells of a Count and his Countess who are riding on horseback when the Count suddenly expresses his desire for a girl with 'skin as white as snow', 'lips as red as blood' and 'hair as black as a raven'. She then materialises before their very eyes, after which, the Count lifts her up, and sits her in front of him on his saddle. ...read more.

'Oh how I long for a girl as white as snow'. At face value, this certainly seems to suggest s****l desire yet the words 'girl', suggests innocence and the colour 'white' used in the simile suggests purity, possibly virginal purity which in today's context suggests a sick depravity typically linked with paedophiles or perverts. This idea of s****l depravity continues a little later in the story. '...the Count got off his horse, unfastened his breeches and thrust his virile member into the dead girl'. Again, the fact that he simply rapes what is described by Carter as a 'girl' is a sickening act of s****l violence. Carter uses dark, discomforting and vile language to disturb the reader and emphasise the brutality of this crude act. At this stage, one wonders whether the 'grey' colour assigned to the Count's personality is correct, or, perhaps more accurately, has been misinterpreted by myself. The Count, at this stage appears to be as 'black' as the Countess - he appears totally inhumane and acts despicably without remorse. However, we do see glimpses of a softer side to the Count which hints that he does possess mortal feelings and emotions after all, for example, when he sees the Countess 'as bare as a bone and the girl furred and booted'. ...read more.

In addition, 'the Countess dropped her glove in the snow and told the girl to get down to look for it...' - again showing her superiority in both status and age as opposed to The Snow Child. Towards the end of The Snow Child, we see just how evil and perverted the Countess actually is. It is she who demands the girl to 'Pick me one' when passing a 'bush of roses' - the rose that she picks eventually kills her as she 'p****s her finger on the thorn'. As a result she 'bleeds; screams; falls.' Bizarrely, the 'weeping' Count gets off his horse and proceeds to r**e the corpse in a horrific act of necrophilia - all the while, the Countess 'watched him narrowly', hinting at a spiteful evil glare. 'He was soon finished'. In my opinion, it is at this point where the Count loses the little respect the reader would have had for him and suggests a certain degree of incapability on his part. Finally, the Countess 'stroked her fur' with 'her long hands' whilst the Count 'picked up the rose, bowed and handed it to his wife', suggesting a transfer of power at this late stage in the story. She drops the rose after touching it, declaring, 'It bites!'. ...read more.