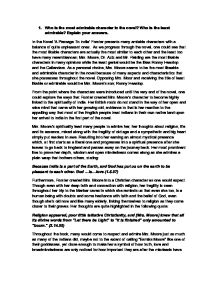 1. Who is the most admirable character in the novel? Who is the least admirable? Explain your answers. In the Novel 'A Passage To India' Forster presents many amiable characters with a balance of quite unpleasant ones. As we progress through the novel, one could see that the most likable characters are actually the most similar to each other and the least too have many resemblances; Mrs. Moore, Dr. Aziz and Mr. Fielding are the most likable characters in many opinions while the least genial would be the likes Ronny Heaslop and the Callendars. As a personal choice, Mrs. Moore seems to be the most likeable and admirable character in the novel because of many aspects and characteristics that she possesses throughout the novel. Opposing Mrs. Moor and receiving the title of least likable or admirable would be Mrs. Moore's son; Ronny Heaslop. From the point where the characters were introduced until the very end of the novel, one could explore the ways that Forster created Mrs. Moore's character to become highly linked to the spirituality of India. ...read more.

Though even with her deep faith and connection with religion, her fragility is seen throughout her trip to the Marbar caves in which she reminds us that even she too, is a human being with doubts and some hesitance with faith and the belief of God, even though she's old now and like many elderly, linking themselves to religion as they come closer to their graves. Her thoughts are quite highlighted in the following quote: Religion appeared, poor little talkative Christianity, and [Mrs. Moore] knew that all its divine words from "Let there be Light" to "It is finished" only amounted to "boum." (2.14.99) Throughout the book, many would come to respect and admire Mrs. Moore just as much as many of the Indians did, maybe not to the extent of calling "Esmiss Moore" like one of their goddesses, yet close enough to make her a symbol of how truth, love and broadmindedness are only noticed for how important they are after the misdeeds have been done. Her particular fragility is what gives that away, and also her death on board the ship. ...read more.

One particular statement is how Ronny comments of people such as Dr. Aziz and his friend Humaidallah. Both educated Indians who seemingly deserve the respect that should be given to them as people of knowledge, yet Ronny simply states a clich� example of what his superiours would have said. It's the educated native's latest dodge ...there's always something behind every remark he makes, always something, and if nothing else he's trying to increase his izzat-in plain Anglo-Saxon, to score. Of course there are exceptions. (1.3.86) Only later on does he say there are some exceptions with a moment of pause, yet it cannot be ignored how in fact, Englishmen of that time saw them that way when they go to a Colonized India. Over all, Ronny's character and attitude towards the natives and his imitation of his fellow British gentlemen creates him into what any reader would think that he is only after his own personal gain, even throughout the book, the reader would notice that even with Adela's trial, his personal interests were not the safety of his wife-to-be, or for the progress of law and justice in India, but only to make his position higher and more noticeable to his higher-ups. ...read more.