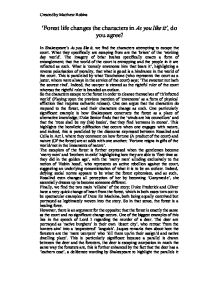 Forest life changes the characters in As you like it, do you agree?

'Forest life changes the characters in As you like it', do you agree? In Shakespeare's As you like it, we find the characters attempting to escape the court. What they specifically are escaping from are the 'briars' of the 'working day world'. The imagery of briar bushes specifically enacts a form of entanglement; that the world of the court is entrapping and the people in it are reflected as such. What is 'comely envenoms him that bears it', highlighting a reverse polarisation of morality, that what is good is a hindrance in the world of the court. This is paralleled by what Touchstone (who represents the court as a jester, whom were always in the service of the court) says; 'The sweetest nut hath the sourest rind'. Indeed, the usurper is viewed as the rightful ruler of the court whereas the rightful ruler is branded an outlaw. So the characters escape to the forest in order to cleanse themselves of 'th'infected world' (Playing upon the previous mention of 'envenoms' as a form of physical affliction that requires cathartic release). ...read more.

One of the biggest examples of this lies in the speech of Lord 1 regarding the murder of a deer. The deer are portrayed as 'native burghers' in their own 'desert city', who retreat 'from the hunters aim' into a 'sequestered' 'languish'. Jaques remarks then about how the foresters are the 'mere usurpers' who 'kill them up/in their assign'd and native dwelling place'. This is particularly significant because a parallel is drawn between the deer and the foresters, the deer is escaping usurpation in much the same way the foresters are, this is further enhanced by the fact that the deer has a 'leathern coat', a deliberate wording by Shakespeare to highlight the parallels it has with its human usurpers. This usurpation is shown elsewhere in the book, Rosalind who buys the shepherds 'passion' (Livelihood) because it is 'much upon her fashion', suggesting a transitory or arbitrary desire, devoid of consideration for the fact that the shepherd derives his survival from his flock. Indeed, she wishes to 'waste her time' here, rather than use it for any meaningful purpose. ...read more.

Indeed, at the very end, we all are 'sans teeth, sans taste, sans everything', emphasising the fact we all end up subjected to time and age, no better for our experiences in life. This is particularly ironic of course, because earlier on in the story, the forest is described as having 'no clock', but it is infact time that undoes all as expressed in this passage, enacting the futility of escape and the absence of any change in outcome from action. Finally, we have the ephemeral nature of the escape for the audience. As alluded to in the preceding paragraph, the audience are 'players' and actors in the play to, but do they change? At the very end, within the epilogue, Rosalind breaks the fourth wall, essentially undermining the experience of the play, returning the audience from the 'forest' (The imaginative space of the play) to the 'court' (Reality). She directly remarks upon the fact that it is a play, that it is a constructed narration and further commends it to be watched by the friends of the audience (Cementing the notion of 'realism' in the fact that the play is a commercial enterprise at heart, not a creative escape). Created by Matthew Robins ...read more.