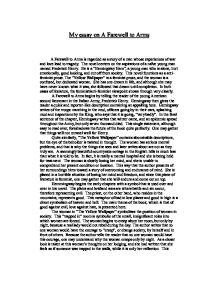 A Farewell to Arms is regarded as a story of a man whose experiences of war and love lead to tragedy. The novel centers on the aspirations of a nave young man named Frederick Henry.

My essay on A Farewell to Arms A Farewell to Arms is regarded as a story of a man whose experiences of war and love lead to tragedy. The novel centers on the aspirations of a na�ve young man named Frederick Henry. He is a "Hemingway Hero", a young man who is alone, hurt emotionally, good looking, and cut off from society. This novel functions as a anti-feminist prose. The "Yellow Wallpaper" is a feminist prose, and the woman is a confused, but dedicated woman. She has one dream in life, and although she may have never known what it was, she followed that dream until completion. In both cases of literature, the feminist/anti-feminist viewpoint shows through very clearly. A Farewell to Arms begins by telling the reader of the young American second lieutenant in the Italian Army, Frederick Henry. Hemingway then gives the reader a quick and reporter-like description containing an appalling tone. ...read more.

This way that the author presents of her surroundings hints toward a story of overcoming and endurance of mind. She is placed in a horrible situation of losing her mind and freedom, and since this piece of literature is feminist, one may gather that she will endure and come out on top. Hemmingway begins the early chapters with a symbol that is used over and over in his novel. The plains and lowland area are where battle and sin occur, therefore representing evil. The priest, on the other hand, who resides in the mountains, represents good. This metaphor of bad in low places and good in high is a direct symbolism of heaven and hell. The main theme of the book, which is that of good against evil, love against hate, is presented here. The woman in "The Yellow Wallpaper" symbolizes the position of women in society. This "trapped in" room is symbolic of the small, insignificant roles into which women are forced. ...read more.

Both of our protagonists realize that there is a better way, and change is a tough, but worthwhile process that evolves a person into so much more emotionally, mentally, and even spiritually. The woman and young Frederick begin to live their lives for a higher purpose, and seek higher and higher goals. The woman continues to creep, and has just overcome society. Frederick begins to live his life free from other's opinions of him, and he seeks something higher than sexual and alcoholic pleasures. These two survivors of society both lose part of themselves to gain so much more. The woman, in spite of losing her mind, gained a symbolic victory for women, and Henry, although losing his love, begins a new life with value and dignity. These victories go to show a reader that, no matter how difficult the task, one can overcome with hard work and dedication. The woman never stopped creeping, even when confronted, and Frederick started clean after his wife passed away and he discovered a better standard of life. ...read more.