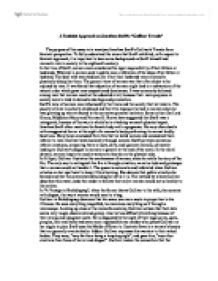 A Feminist Approach on Jonathan Swift's "Gulliver Travels" The purpose of this essay is to annalyse Jonathan Swift's Gulliver's Travels from feminist perspective. To fully understand the views that Swift exhibited, with respect to feminist approach, it is important to have some background on Swift himself and women's role in society in the eighteenth century. In the time of Swift, women were considered the legal responsibility of their fathers or husbands. Whatever a woman said in public was a reflection of the ideas of her father or husband. The ideal wife was obedient, for if not their husbands were allowed to physically discipline them. The general view of women was that of an object to be enjoyed by men. It was feared that education of women might lead to a subversion of the natural order which gave men unquestioned dominance. It was commonly believed among men that women need not be educated at all, because their main purposes in society were to tend to domestic dealings and procreation. Swift's view of woman was influenced by the times and the society that he lived in. The paucity of love in author's childhood and the little exposure he had to women when he was growing up also attributed to the corrosive personal isolation. ...read more.

When Gulliver sees beggars and homeless, he describes in unkind detail the lice crawling on their clothes. The homeless beggar with cancerous breast is a horrific sight to Gulliver as he can see into the crevices and cavities in her body, destroyed by vermin and disease. That is "the most horrible spectacle that ever an European eye beheld". Swift deploys the rhetorical "instruments" necessary for such disavowal figuring the decaying body as female. In Brobdingnag, Gulliver is shocked to see the "monstrous breast" of a nurse giving suck in front of him. Even the act of feeding does not escape his disgust: "I must confess no object ever disgusted me so much as the sight of her monstrous breast..." The flying island of Laputa (from the Spanish la puta, "the w***e") has been the object of several feminist discussions particularly to show that women are repeatedly described separately from men. The women are described by geometric shape and mathematical figures. Furthermore, the women are not allowed to explore or travel off the island without specific doctrine from the King. In Laputa, a wife is someone who would rather prostitute herself than stay with her neglectful husband. According to Susan Bruce, Gulliver's Voyage to Laputa enacts men's ultimate inability to control women's bodies and desires. ...read more.

Swift writes " the handsomest among these Maids of Honor, a pleasant, frolicsome girl of sixteen, would sometimes set me astride one of her n*****s..." The s****l reference and the attention to the girl's age, signify the lack of morals instilled in some young women of Swift's time. Swift makes examples of these women, not so much as to degrade them, but to condemn their behavior. Swift is bashing, so much as the behavior of men and women in general. Swift puts women on the same level as men, where they are to be judged based upon their capabilities, and of being a worthwhile person, instead of an object of beauty. He goes to the extreme of using bodily functions as a means to symbolize equality, which also serves to express the ridiculousness of the entire situation. Essentially what Swift is saying is that the value of a woman should be based on who she is and not what she appears or what a man desires her to be. Jonathan Swift desired a better human race than existed in the 1700's. He wanted a society in which women were educated equally with men. He wanted a society in which men and women placed a great deal of importance on their virtue, morals and intelligence.Through his satirical views of the human condition, Swift illustrates the weaknesses of mankind and his own ideal for the improvement of humanity. ...read more.