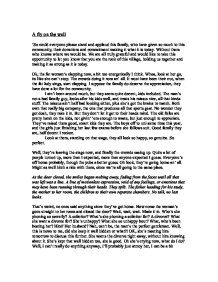 A fly on the wall

A fly on the wall 'So could everyone please stand and applaud this family, who have given so much to this community, their donations and commitment making it what it is today. Without them who knows where we would be. We are all truly grateful and would like to take this opportunity to let you know that you are the rock of this village, holding us together and making it as strong as it is today. Ok, the fat woman's clapping now, a bit too energetically I think. Whoa, look at her go, its like she can't stop. The crowds doing it now an' all. It must have been their cue, when the fat lady sings, start clapping. I suppose the family do deserve the appreciation, they have done a lot for the community. I ain't been around much, but they seem quite decent, kids included. The man's not a bad family guy, looks after his kids well, and treats his missus nice, all that kinda stuff. The missus ain't half bad looking either, plus she's got the brains to match. Both own that really big company, the one that produces all that sports gear. No wonder they got dosh, they rake it in. But they don't let it get to their heads mind. The old folks are pretty harsh on the kids, not givin' 'em enough to waste, but just enough to appreciate. They've raised them good, smart kids they are. ...read more.

She's always working though, never leaves her desk unless there's a family do or somethin' like that. Lets see what she's writing, probably something boring like her maths homework or something.... You OK? 'Too much has been going on here at home. I think Mum's in real deep now. She tries to hide it but I can see straight through her. She's so pathetic, thinking she can get away with it. I know dad might not be the best, but he don't deserve this. I never thought she could be this selfish, but it just proves that you don't even know your mother. How could she do it? I would never have believed it if I hadn't heard it for myself. But I did. Just now. She was the phone to him, saying how she was gonna meet him tomorrow at some swanky caf�. I can't believe it, I really can't. My own mother...' What she talking about? Knows bout her mum gettin' divorced? Don't know why she's getting so worked up though. Wait, there's more... 'my own mother having an affair. Its disgusting, totally disgusting. I don't think I will ever forgive her for this. For doing this to us or to dad. Ever. I'll let you know when I learn something new, but promise me you won't tell a soul. For now, I want to keep it in the family, you know, see if she'll have the guts to tell us herself. ...read more.

He looks so determined, must get that from his mother. That's it. He's zipped it up. Putting it under his bed, pushing it quite far back, probably to keep it away from the probing hoover stick. The mans calling 'em all downstairs now. What? They're all going out again? Again? After everything that's happened? Well, that's strange, they're all listening to him. Look how they are though, all look like zombies, no emotion, no expressions. I'm sure someone will notice if they step out of the house with faces as sullen as those. Looks like someone's gone and died on them! Hang on, wait for me, don't want to be left alone in the house now do I? Oh, another community event, a school fete. Got some nice stuff here. This cake here looks quite nice. I'll just help myself to some. Look at them all. Making their way up onto the stage. Wait a minute. They are not the same people I just saw. Look at how much she's smiling, laughing at every corny joke, not slipping up once. Maybe it is true, that someone can have two totally different personalities. And look at Jaq, linked arms with her mum, bringing her drinks, talking to her friends. This is really strange. And the boy looks like his won a million bucks. Standing there with his father, shaking hands with all those flash business men, its like a completely different set of people. This cannot be true, it seems so strange, so... ... ... ... ... ... ... ... ... '...d**n that stupid fly, we're going to have throw that slice away. God knows where that fly's been.' ...read more.