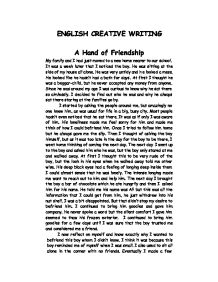 A Hand of Friendship

ENGLISH CREATIVE WRITING A Hand of Friendship My family and I had just moved to a new home nearer to our school. It was a week later that I noticed the boy. He was sitting at the side of my house all alone. He was very untidy and he looked a mess. He looked like he hadn't had a bath for days. At first I thought he was a beggar-child, but he never accepted any money from anyone. Since he was around my age I was curious to know why he sat there so aimlessly. I decided to find out who he was and why he always sat there staring at the families go by. I started by asking the people around me, but amazingly no one knew him, as was usual for life in a big, busy city. Most people hadn't even noticed that he sat there. It was as if only I was aware of him. His loneliness made me feel sorry for him and made me think of how I could befriend him. Once I tried to follow him home but he always gave me the slip. Then I thought of asking the boy himself, but as it was too late in the day for the boy to be there, I went home thinking of coming the next day. The next day I went up to the boy and asked him who he was, but the boy only stared at me and walked away. ...read more.

Then one day I thought of a way to make him tell me what was bothering him. Ali had always been in awe of my bicycle which he always wanted to ride whenever he was with me. I could not think of a way to make him tell me about his past, except by making him trust me so much that he would feel at ease at telling me about his past. I collected my pocket money for the next few weeks until I had enough money to buy him a bicycle exactly like mine. He was so pleased with my gesture that he felt he could trust me. He then told me about his past. Ali was the only child of his parents. He used to be very pampered by his parents. He always had the best of everything. His parents showered him with a lot of love. He had a perfect home. A home that any child would want. He had many friends at school and he was a happy child. But his happiness was short-lived. Disaster struck. His parents were killed in a car accident. The car crash had destroyed his life. His world had crumbled and he was orphaned and robbed of all his happiness. I felt very sorry for him. This traumatic experience was worsened by the fact that his aunty who should have been a foster mother accepted him with reluctance. ...read more.

I was shocked! She said that he had committed suicide. Why? Why? I asked myself a thousand times. I got my answer in the letter he left me. First of all he thanked me for all that I had done and then he apologised for the pain he knew his death would cause. He said he had learnt to overcome the grief of his parents' death because of my help, but the latest revelation about his parents had shattered him and he couldn't bear the thought of living. I looked at his aunt for answers. She revealed that Ali's parents hadn't died. They couldn't afford to look after him and so gave him up for adoption. Ali felt abandoned. Now they were well off and wanted Ali back. So they were coming to collect him. Ali felt as if he had been used as a p**n by his parents. The idea of facing them was too much for him to take. I thought of how Ali had believed that his parents were dead. I had thought that finding out that his parents were alive would make Ali happy but that was not true. It shows how little I knew about Ali and how I hadn't really helped him. This caused me know my friends better and to help them even when they say they are alright and don't need help. It taught me what real friendship should be. I wish Ali had given me the opportunity to help him out of this one. I miss Ali -I miss my friend. ...read more.