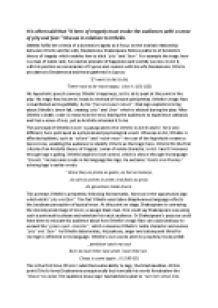 A hero of tragedy must evoke the audiences with a sense of pity and fear.&quot; Discuss in relation to Othello

﻿It is often said that ?A hero of tragedy must evoke the audiences with a sense of pity and fear." Discuss in relation to Othello. Othello fulfils the criteria of a domestic tragedy as it focus on the marital relationship between Othello and his wife, Desdemona. Shakespeare follows patterns of Aristotle?s theory of tragedy which enables him to elicit ?pity? and ?fear?. For example the tragic hero is a man of noble rank, he reaches pinnacle of happiness and worldly success. In Act II, with his position as commander of Cyprus and reunion with his wife Desdemona: Othello proclaims to Desdemona and those gathered in Cyprus: ?If I were to die to die, ?Twere now to be most happy; ( Act II.i.181-182) His hyperbolic speech conveys Othello?s happiness, as it is at its peak at this point in the play. His tragic flaw however, leads to reversal of fortune (peripeteia). Othello?s tragic flaw is manifested as his gullibility, by his ?free and open nature?, that Iago exploits to bring about Othello?s down fall, creating ?pity? and ?fear? which is elicited during the play. After Othello?s death, order is restored in the end, leaving the audiences to experience catharsis and feel a sense of loss, just as Aristotle intended it to be. ...read more.

Perhaps this is why Othello?s rude behaviour is justified in Act IV onwards as "he is black man responding to racism" [Actor Patrick Stewart]. In Act I, Othello responds to racism in non-passive approach, through eloquent dialect ?pardon me?, However in Act Iv Othello feels racially inferior, alienated and loses control and responds in aggressive manner ?strumpet? . I think his behaviour is justified as he unaware of the real situation, and feels alienated. As the play progresses and Iago?s machinations and plans take shape, Othello?s speech declines from prose to verse; he speaks in broken sentences: ? Lies with Her? Lie on her? we say lie on they belie on her. (IV.1.135-136) The structure of Othello speech signifies that Othello is not in right state of his mind; his speech is quick paced and lacks coherence reflecting his ?broken? mind. Even Desdemona has noticed the poignant change in the Othello ?my lord is not my lord?. This begins to create ?pity and fear? for Desdemona, she is too naive to realise his jealousy. The audience feel great pity for Desdemona and fear Othello as he [strikes her]. The stage directions play an important role. Dramatists have often portrayed Desdemona being thrown dramatically and her cheeks appearing bright red. The eponymous hero at this point could be seen eponymous villain, as begins adopt anti- hero like qualities. ...read more.

It also infers Iago has duplicitous nature. The Audiences will fear Iago as he presented as dangerous figure. Also this statement mimics the Biblical God; in exodus God says ?I am what I am?; and just like a god, Iago controls the dynamics of the play. The monosyllabic declarative create suspense as well as anticipation, as we are unaware of his abilities. The fact that he is referred to ?Honest Iago? creates dramatic irony, as the audience are aware of his duplicitous nature and the characters on stage are not. Desdemona is ?honest? to Othello, she remains faithful, and her innocence is juxtaposed in his perception of her character as the ?whore of Venice?. The use of ironies evokes the audience to feel pity for Desdemona, as she the helpless victim. They also feel pity for Othello as he being manipulated. The final scene of Othello is very cathartic. It purges emotions, as the audience feel both ?pity? and ?fear? for both Desdemona and Othello. We feel there is a sense of waste and loss. The deaths of Desdemona, Othello and Emilia were ?unnecessary?, because these characters were innocent puppets of Iago?s game. Othello briefly returns to his former glory through his Ananogrosis "O fool" [ActV.ii.320], he regains his dignity returns to speak in former figurative language ?Drops tears as fast as the Arabian trees?. In my opinion, Othello suicide was way to redeem him. The sense of loss in the play is profound by evoking ?pity and fear. ...read more.