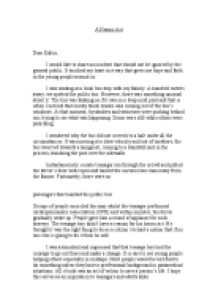 ﻿A Heroic Act Dear Editor, I would like to share an incident that should not be ignored by the general public. It touched my heart in a way that gives me hope and faith in the young people around us. I was waiting at a local bus stop with my family. A hundred metres away, we spotted the public bus. However, there was something unusual about it. ...read more.

It was moving at a slow velocity and out of nowhere, the bus swerved towards a lamppost, coming to a standstill and in the process, knocking the post over the sidewalk. Instantaneously, a male teenager ran through the crowd and pulled the driver?s door wide open and hauled the unconscious man away from the flames. Fortunately, there were no passengers that boarded the public bus. ...read more.

He had a notion that if no one else is going to do it then he will. I was astonished and impressed that that teenage boy had the courage to go out there and make a change. It is rare to see young people helping others especially in mishaps. Most people would be terrified to do something unless they have a professional background in paramedical situations. All it took was an act of valour to save a person?s life. I hope this serves as an inspiration to teenagers and adults alike. An optimistic citizen ...read more.