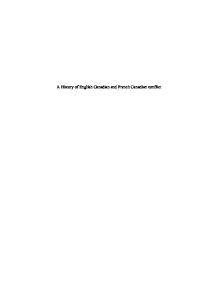 A History of English Canadian and French Canadian conflict.

A History of English Canadian and French Canadian conflict History shows early conflicts between English and French settlers in Canada. Competition in the fur trade and later mirroring results from the changing of political powers of battles fought across an ocean led to Canada being dominated by British rule. However, the base of historical conflicts between English Canadians and French Canadians included religious disputes, the value of industry versus land, relations with native populations, and the perception of an individual's role in society. These themes are repeated through key events such as the Proclamation of 1763, the Quebec Act, and the Constitutional Act of 1791, and they are also evidence in the current political climate today. While Cartier is credited for the initial claim of land for France, Samuel de Champlain is given the title of founder. He established a business in fur trade near the St. Lawrence River, but to Champlain a truer purpose in life was the conversion of the Amerindians to Christianity. If this could be done while promoting the successful commerce of New France, then so much the better (Morton 16-18). It seems that religion was also used as a means of controlling certain alliances: "The French missionaries are said to have made use of singular methods to excite their flocks against the heretics. ...read more.

While the reaction of the French Canadians are assumed to be mostly positive, the reaction of the thirteen English colonies ranged from surprised to hostile. First, the act defined boundaries in ways that limited the growth of the colonies. These new boundaries extended westward to the Mississippi, included islands in the St. Lawrence, and north to Hudson Bay. Even more of a threat to the predominantly Protestant colonies was the Act's support of Roman Catholicism. "It is hereby declared, That His Majesty's Subjects professing the Religion of the Church of Rome, of, and I the said Province of Quebec, may have, hold, and enjoy, the free Exercise of the Religion of the Church of Rome" (Essential Documents, Quebec Act). The response was so strong that the Quebec Act is credited as a major driving force behind the American Revolution. While the act may have helped cost England her colonies, it simultaneously helped maintain loyalty of the French Canadians during the Revolution. The end of "the American Revolutionary War left Britain with the cold, unprofitable remnants of the continent. Perhaps something might be made of them" (Morton 29). The Constitutional Act of 1791 divided the province into Upper and Lower Canada along line that reflected the cultural differences of English and French settlement patterns. ...read more.

Conflict over land disputes is another common theme. The value of locations near ports of trade began with the first settlers. Equally important to the French Canadians, however, was the dependence their culture had on maintaining large amounts of land for agriculture. Religion and industry versus cleaving to the land also reflect another source of conflict; this is the perception of the individual's role in society. The French Canadians valued an individual's connections to the whole; an individual is part of a family, part of the church, and part of the land. The English culture, while appreciating these connections, placed greater value on individual success and one's ability to take advantage of opportunity. Unfortunately, these values often led to exploitation of resources (Conwill 16-21). A common perspective of an English settler was that "the wilderness was a hostile and relentless force that had to be destroyed if it was not to destroy him" (Edmonds 145). While we speak of these cultural differences in the past tense, the reality is that Quebec "was North America's last agricultural frontier" with the Department of Colonization operating through the 1950s (Conwill). Today, Canada is still faced with the potential separation of Quebec (Griffith 29-36). In order to fully understand the complexities of Canadian politics today, we must look to her past. Armed with this information, we can better prepare for either Canada as two countries or perhaps finally see a sense of peace and the prevailing of unity. ...read more.