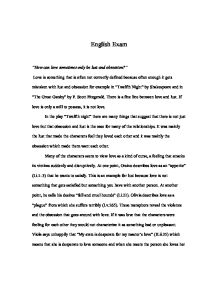 How can love sometimes only be l**t and obsession?

English Exam "How can love sometimes only be l**t and obsession?" Love is something that is often not correctly defined because often enough it gets mistaken with l**t and obsession for example in "Twelfth Night" by Shakespeare and in "The Great Gatsby" by F. Scott Fitzgerald. There is a fine line between love and l**t. If love is only a will to possess, it is not love. In the play "Twelfth night" there are many things that suggest that there is not just love but that obsession and l**t is the case for many of the relationships. It was mainly the l**t that made the characters feel they loved each other and it was mainly the obsession which made them want each other. Many of the characters seem to view love as a kind of curse, a feeling that attacks its victims suddenly and disruptively. At one point, Orsino describes love as an "appetite" (I.i.1-3) that he wants to satisfy. ...read more.

In The Great Gatsby, the characters, Jay Gatsby and Daisy Buchanan are said to be in love, but in reality, this seems to be a misconception. In The Great Gatsby, Fitzgerald portrays the themes of love, l**t and obsession, through the character of Jay Gatsby, who confuses l**t and obsession with love. By the end of the novel however, Jay Gatsby is denied his "love" and suffers an undeserved death. Fitzgerald interconnects the relationships of the various characters to support these ideas. The character of Jay Gatsby was a wealthy man, who the author developed as arrogant and tasteless. Gatsby's love interest Daisy Buchanan, who was already married to Tom Buchanan. She is the perfect example of how women of her level of society were supposed to act in her day. The circumstances surrounding Gatsby and Daisy's relationship kept them apart. For Daisy to have been with Gatsby would have been forbidden, due to the fact that she was married. ...read more.

It is mentioned that before he met Daisy, he lusted after many women, yet he had no respect for them. Until Gatsby met Daisy, he took women for granted, never understanding the value of respect and love. The character of Gatsby gives enough evidence to conclude that l**t has nothing to do with love, and that they are entirely different frames of mind. Gatsby lusted for women, but did not respect or love his l**t objects. They were only objects of desire. When l**t becomes an obsession, l**t becomes dangerous. It can completely overpower a person until they become controlled by it. By the end of this book, Gatsby becomes obsessed with Daisy. He thinks of nothing else but her and constantly analyses over every little detail of her life. He wanted her so much to have her, that it consumed his life. In "Twelfth Night" as in "The Great Gatsby" the succession of love, to l**t, to obsession is clearly shown. By showing this succession, they differentiated between the three, deducting that they all were different things. If love is only a will to possess, it is not love. ...read more.