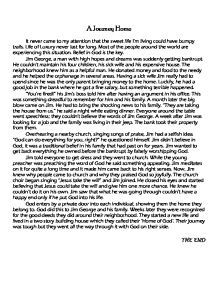 It never came to my attention that the sweet life I’m living could have bumpy trails. Life of Luxury never last for long. Most of the people around the world are experiencing this situation. Belief in God is the key.

Jim George, a man with high hopes and dreams was suddenly getting bankrupt. He couldn’t maintain his four children, his sick wife and his expensive house. The neighborhood knew him as a helpful man. He donated money and food to the needy and he helped the orphanage in several areas. Having a sick wife Jim really had to spend since he was the only parent bringing money to the home. Luckily, he had a good job in the bank where he got a fine salary, but something terrible happened.

“You’re fired!” his Jim’s boss told him after having an argument in his office. This was something dreadful to remember for him and his family. A month later the big blow came on Jim. He had to bring the shocking news to his family. “They are taking the house from us.” he said a night while eating dinner. Everyone around the table went speechless; they couldn’t believe the words of Jim George. A week after Jim was looking for a job and the family was living in their jeep. The bank took their property from them.

Overhearing a nearby church, singing songs of praise, Jim had a selfish idea. “God can do everything for you, right?” he questioned himself. Jim didn’t believe in God, it was a traditional belief in his family that had past on for years. Jim wanted to get back everything he owned before the bankrupt by falsely worshipping God.

Jim told everyone to get dress and they went to church. While the young preacher was preaching the word of God he said something appealing. Jim meditates on it for quite a long time and it made him came back to his right senses. Now, Jim knew why people came to church and why they praised God so joyfully. The church choir began singing “Jesus take the will” and Jim joined. He closed his eyes and started believing that Jesus could take the will and give him one more chance. He knew he couldn’t do it on his own. Jim saw that what he was going through couldn’t have a happy end only if he put God into his life.

God enters by a private door into each individual, showing them the home they belong to. God did this to Jim George and his family. Weeks later they were recognized for the good deeds they did around their neighborhood. They started a new life and lived in a two story building house which they called their ‘Home of God’. Their journey was tough but they went all the way through it with God on their side.