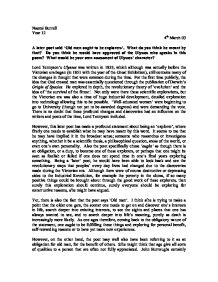 A later poet said 'Old men ought to be explorers'. What do you think he meant by that? Do you think he would have approved of the Ulysses who speaks in this poem? What would be your own assessment of Ulysses' character?

Naomi Burrell Year 12 4th March 03 A later poet said 'Old men ought to be explorers'. What do you think he meant by that? Do you think he would have approved of the Ulysses who speaks in this poem? What would be your own assessment of Ulysses' character? Lord Tennyson's Ulysses was written in 1833, which although was actually before the Victorian era began (in 1851 with the year of the Great Exhibition), still contains many of the changes in thought that were common during the time. For the first time publicly, the idea that God created man was essentially questioned through the publication of Darwin's Origin of Species. He explored in depth, the revolutionary theory of 'evolution' and the idea of 'the survival of the fittest'. Not only were there these scientific explorations, but the Victorian era was also a time of huge industrial development, detailed exploration into technology allowing this to be possible. 'Well-educated women' were beginning to go to University (though not yet to be awarded degrees) and were demanding the vote. There is no doubt that these profound changes and discoveries had an influence on the writers and poets of the time, Lord Tennyson included. However, this later poet has made a profound statement about being an 'explorer', where firstly one needs to establish what he may have meant by this word. It seems to me that he may have implied it in the broadest sense; someone who researches or investigates anything, whether it be a scientific thesis, a philosophical question, areas of the world, or even one's own personality. ...read more.

As discussed before, this could certainly be what the poet meant, and they would probably approve of so much travelling. However, one might suggest from 'I will drink life to the lees' and it continues 'All times I have enjoyed greatly' that Ulysses is simply out to have a good time for himself, indulging in alcohol and so forth. The poet's statement suggests that he might have disapproved of this due to the obligatory nature of 'ought'. Perhaps he would have meant that old men ought to explore for the good of others, although others may well argue that he would not have disapproved at all as Ulysses was simply enjoying himself and this is precisely what one should do in one's old age. It depends how one interprets the statement. However, Ulysses goes on to say, 'All times have I suffered greatly' which suggests that he has also been through a lot of hardship and does not just live the life of luxury, perhaps justifying this drinking to the sceptics! He says 'I am become a name; for always roaming with a hungry heart much have I seen and known- cities of men and manners, climates, councils, governments', which implies that he is a man of vast experience, therefore a good deal of knowledge. To me this suggests that the poet would therefore think that he ought to use this experience, and this 'name' that he has become, to explore further. ...read more.

This is exactly what Ulysses is saying here; 'old age hath yet his honour' and 'some work of noble not, may yet be done'. Ulysses also says; 'It may be that the gulfs will wash us down. It may be we shall touch the Happy Isles' (these being Elysium, the Greek heaven for philosophy), which suggests that he is prepared for both the worst and the best things that may face him, but realizes he will never know what is to come unless he tries it. This 'carpe diem' meaning 'seize the day', attitude would most likely have impressed the poet as I think this exactly what the poet means by his attitude. I think this later poet, whoever he was, and from whichever standpoint he meant his statement that 'Old men ought to be explorers', would have approved of Ulysses in some way. I personally agree with the statement and all the things mentioned about growing old that the poet could have meant, and indeed approve of Ulysses. It seems that he wants to explore in every sense of the word which firstly is an amazing and ambitious plan, that he realises that death is looming yet is determined nevertheless despite his weaknesses, and also that he wants to explore not only for himself but encourages others to do so as well. I agree, as I am sure the poet would, that living life to the full 'were all too little' if one were simply to breathe and do very little; 'As though to breathe were life', even in old age. ...read more.

Approximately half of the essay consists of generally thoughtful and sensitive comments on old age. Unfortunately this cannot be rewarded in terms of marks - only detailed and perceptive analysis of the poem can be credited. The wording of the question was not helpful in that it seems to encourage 'approval' for Ulysses when what is really required is a balanced consideration of the positive and negative aspects of his character as revealed by the dramatic monologue form and the language choices the poet
has made.