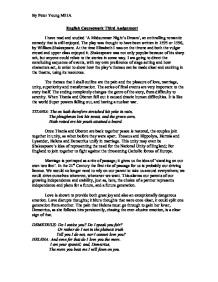 English Coursework Third Assignment I have read and studied 'A Midsummer Night's Dream', an enthralling romantic comedy that is still enjoyed. The play was thought to have been written in 1595 or 1596, by William Shakespeare. At the time Elizabeth I was on the throne and both the vulgar crowd and upper class enjoyed it. Shakespeare was not only popular because of his sharp wit, but anyone could relate to the stories in some way. I am going to direct the concluding sequence of events, with my own preference of stage setting and how characters act, in order to show how the play's themes can be made clear and exciting in the theatre, using its resources. The themes that I shall outline are the pain and the pleasure of love, marriage, unity, superiority and transformation. The series of final events are very important to the story itself. The ending completely changes the genre of the story, from difficulty to serenity. When Titania and Oberon fell out it caused drastic human difficulties. It is like the world Super powers falling out, and having a nuclear war. TITANIA: The ox hath therefore stretched his yoke in vain, The ploughman lost his sweat, and the green corn, Hath rotted ere his youth attained a beard. Once Titania and Oberon are back together peace is restored, the couples join together in unity, as when before they were apart. Theseus and Hippolyta, Hermia and Lysander, Helena and Demetrius unify in marriage. ...read more.

This is something that the human is incapable of; by reforming every few years for a new era, a new fashion, we are pitiful, compared to the wondrous and enviable spirits, who know their strengths and are secure in their setting and their power. OBERON: With this field-dew consecrate, Every fairy take his gate. This leads on to how I will set and dress my play; Oberon would be dressed very mystically and naturistic. However I shall go into greater detail later. Firstly, my set would be staged indoors, the centrepiece, a large richly furnished staircase heading up and away from the audience. There will be two places which you could exit the stairs; two small exits each side of the stairs, turning off to a hallway on both sides. On the left side there would be a slope going down and a large crystal chandelier hanging down from the ceiling. There would also be wires, on which the spirits could fly and also have elevated jumping. Also the spirits would all be in dark patches on the stage, when it came to them acting, they would be lighted up slowly, as if the materialised out of nowhere, when darkness falls. My cast shall be clad in a suitable, yet modern style of outfits, some portraying their personalities, and others showing their stance of superiority, or inferiority. Puck would be dressed in a jester hat and also in a suit, half black and half white, split down the middle, implying his unpredictability, and also his split personality; sometimes loyal friendly servant, at other times a wild eccentric joker. ...read more.

Also, at the start of the sentence, Oberon uses the word 'Never'; a word rarely used for this. It gives a stern impression, that no other word can, and also the feel for an impending conclusion. In last section of speech, Puck comes out to the audience, to personally address them. He rejoins Oberon, and is content once again, however, Oberon leaves with Hippolyta and Puck is rejected. He walks up across the stage towards the audience and sits on the edge, with his bare feet hanging off. He feels relaxed now, almost like talking to a shrink; he leaves his energetic side, and talks freely. Here he ponders whether he should join the humans in their bizarre world, or go back with the spirits, to be rejected again. He gives a short weathered smile, unlike before with his beaming grins, his morale is slowly disintegrating, and he puts his head in his hands. After once being at the brink of 'destruction', the fairy mentioned in Act 2, appears onstage. She sees Puck all alone, and walks across to him, and taps him on the shoulder. He replies with his trademark grin and jumps back to his feet, grabs the fairy's hand and runs away, yet again pleased. The stage is then completely empty, and a pause where the audience feel that the end of the dream has arrived, and that they are privileged to have viewed this play, like Bottom was transformed, they had been transformed, from normal monotonous life, to fortunate onlookers of this fantasy spirit world. ?? ?? ?? ?? By Peter Yeung M51A ...read more.