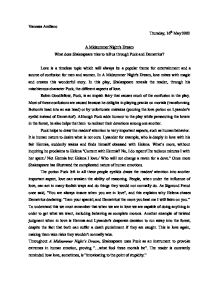 A Midsummer Night's Dream - What does Shakespeare try to tell us through Puck and Demetrius?

Vanessa Arellano Thursday, 16th May 2002 A Midsummer Night's Dream What does Shakespeare tries to tell us through Puck and Demetrius? Love is a timeless topic which will always be a popular theme for entertainment and a source of confusion for men and women. In A Midsummer Night's Dream, love mixes with magic and creates this wonderful story. In this play, Shakespeare reveals the reader, through his mischievous character Puck, the different aspects of love. Robin Goodfellow, Puck, is an impish fairy that causes much of the confusion in the play. Most of these confusions are caused because he delights in playing pranks on mortals (transforming Bottom's head into an a*s head) or by unfortunate mistakes (pouring the love potion on Lysander's eyelid instead of Demetrius'). Although Puck adds humour to the play while persecuting the lovers in the forest, he also helps the them to redirect their devotions among one another. Puck helps to draw the readers' attention to very important aspects, such as human behavior. It is human nature to desire what is not ours. ...read more.

Another example of twisted judgment when in love is Hermia and Lysander's desperate decision to run away into the forest, despite the fact that both can suffer a death punishment if they are caught. This is love again, making them take risks they wouldn't normally take. Throughout A Midsummer Night's Dream, Shakespeare uses Puck as an instrument to provoke extremes in human emotion, proving "...what fool these mortals be". The reader is constantly reminded how love, sometimes, is "intoxicating to the point of stupidity." Without Puck causing confusions, A Midsummer Night's Dream would be neither exciting nor funny. In fact, there would be no story because things would stay the way they started. Puck gives humor to the story, because he is different from all the other characters in many ways. He is mischievous, naughty and even jealous. By his mischief we understand human behavior under love's effects and by being jealous he is challenging, as when he replies to Oberon he could "put a girdle round the earth in forty minutes". ...read more.

That is exactly what Shakespeare tries to tell us. Demetrius was never in love with Hermia, but obsessed. Deep inside he still loved her. He just realized or admitted how much he loved her as soon as Lysander starts to flirt with her. As we can see, there are two very different characters in this play. Puck, who represents magic in the play and luck or destiny and Demetrius, who represents a common teenager [I wouldn't use this word teen here. In Shakespeare's time, your teen years were the not like today, and you take away from the significance declaring him a teenage lover.] lover who doesn't understand the real significance of love until he starts to love Helena again. Shakespeare uses Demetrius and the other three lovers to make us understand the complicated nature of human love among each other. Having them to pass through questionable and foolish actions which makes us agree with Theseus when he states that; "Lovers and madmen have such seething brains,/Such shaping fantasies, that apprehend/ More than cool reason ever comprehends." ...read more.