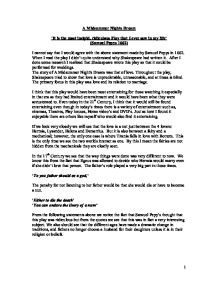 A Midsummer Nights Dream 'It is the most insipid, ridiculous Play that I ever saw in my life' (Samuel Pepys 1662) - Discuss

A Midsummer Nights Dream 'It is the most insipid, ridiculous Play that I ever saw in my life' (Samuel Pepys 1662) I cannot say that I would agree with the above statement made by Samuel Pepys in 1662. When I read the play I didn't quite understand why Shakespeare had written it. After I done some research I realized that Shakespeare wrote this play so that it could be performed for weddings. The story of A Midsummer Night's Dream was that of love. Throughout the play, Shakespeare tried to show that love is unpredictable, unreasonable, and at times is blind. The primary focus in this play was love and its relation to marriage. I think that this play would have been most entertaining for those watching it especially in that era as they had limited entertainment and it would have been what they were accustomed to. Even today in the 21st Century, I think that it would still be found entertaining even though in today's times there is a variety of entertainment such as, cinemas, Theatres, Play houses, Home video's and DVD's. Just as how I found it enjoyable there are others like myself who would also find it entertaining. If we look very closely we will see that the love is a not just between the 4 lovers: Hermia, Lysander, Helena and Demetrius. ...read more.

'I could play Ercles rarely, or a part to tear a cat in, to make a split'. 'Let me play Thisbe too. I'll speak in a monstrous little voice' This is contradicting because if you speak in a monstrous voice u can't speak in a little voice as well which shows that Bottom had very little knowledge. This shows Bottom as a very over enthusiastic person as he is trying to persuade Quince that he would be a good Thisbe by acting it with expression. 'Let me play the lion too'. 'I will aggravate my voice so that I will roar as gently as any sucking dove; I will roar you an'twere any nightingale'. This is contradicting because Bottom uses aggravate which makes things worse so we would assume that he really wants a word like moderate, and then it would seem as if he would have some control. He also confuses two models of gentleness- the sucking duck and the sitting dove, the dove is a very peaceful creature. Also a nightingale is a small bird that sings very sweetly in the evening therefore can not be compared with that of a lions roar. In Act 2 sc1 the fairies are introduced but are still not seen by the mechanicals. By this point in the play I think that the audience are anticipating humour before Demetrius and Helena enter the room because when Oberon told puck to ...read more.

This act appeared quite humorous, however, it showed their commitment and how strong and powerful their love was for each other. 'But gentle friend for love and courtesy, Lie further off, in human modesty'. 'So far be distant; and, good night, sweet friend. Thy love ne'er alter till thy sweet life end!' In addition to their modesty things start to go wrong for the four lovers, which is very amusing for the audience as there are more aware of what's going on than the characters are. After Puck makes the mistake of placing the love juice on Lysander, Helena comes along and awakes him from his sleep causing the love circle to start. This creates humour for the four lovers because Demetrius is running away from Helena and Helena is running away from Lysander and Hermia is running after Lysander. I would make this situation very funny by having all four lovers running around after each other in the order that they are running in. So I would have one person running out onto the stage at a time. I like the twist in the narrative that in the beginning Demetrius never loved Helena and now was deeply in love with her She finds this strange and she thinks that he is mocking her. Lysander who has always loved Hermia and is now in love with Helena she also finds this strange and thinks that they are in it together. 1 ...read more.