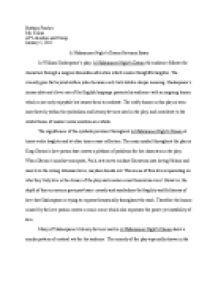 ﻿Brittany Fischer Ms. Kriess AP Literature and Comp. January 5, 2012 A Midsummer Night?s Dream Revision Essay In William Shakespeare?s play, A Midsummer Night?s Dream the audience follows the characters through a magical dreamlike adventure which creates thoughtful laughter. The comedy goes far beyond surface jokes because each trick holds a deeper meaning. Shakespeare?s immaculate and clever use of the English language presents his audience with an ongoing humor which is not only enjoyable but causes them to meditate. The crafty humor in this play is seen most heavily within the symbolism and literary devices used in the play, and contribute to the works theme of reason versus emotion as a whole. The significance of the symbols prevalent throughout A Midsummer Night?s Dream at times evoke laughter and at other times cause reflection. The main symbol throughout the play is King Oberon?s love potion that creates a plethora of problems for the characters in the play. ...read more.

Not only does this statement cause humor because its contradiction but also foreshadows the plays ridiculousness that is shown in repeation of words, unusual metaphors and breaking of the plays illusion of reality. The irony is also something very dominant throughout the play which ?awakens thoughtful laughter?. One example is the dramatic irony in the scene where Bottom?s head is turned in that of a donkey and he doesn?t even realize it or show concern. The many laughs occurring in this scene not only illustrate the books fanciful nature but give us a further understanding of the one of the books main characters, Bottom. The irony of this incoherence towards his transformation indicates his ambivalent attitude and improperly placed priorities similar to Greagor Samsa in Kafka?s Metamorphosis. One of the plays most unique features is its diction and use of it in a way to cause comedy and symbolize the character of whom is speaking. ...read more.

For example Theseus and Hippolyta?s nobility and level headedness represents reason and order that comes from their Athenian noble lifestyle and connection to the day. Oberon and Titania on the other hand represent instability and passion that is expressed through their quarreled marriage and supernatural powers. This tale of frustrated love and mistaken identity makes audiences laugh at the ridiculous ease with which lovers change the object of their affection, while still believing that their feelings are completely sincere. However, although it is a comedy, A Midsummer Night?s Dream also poses some profound and difficult questions: What is love? How and why do people fall in and out of love? Shakespeare leaves such questions for the audience to answer and ponder themselves. Shakespeare writes about kings, fairies and magical spells. Yet he is such a keen observer of human psychology that his characters and themes still speak to today?s audiences. The whole of the play being formed around an underlying genius mind, transforms what may initially be viewed as ridiculous comedy and odd phraseology into an intellectual and meaningful creation that evokes thoughtful laughter. ...read more.