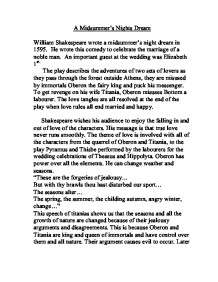 A Midsummer's Nights Dream William Shakespeare wrote a midsummer's night dream in 1595. He wrote this comedy to celebrate the marriage of a noble man. An important guest at the wedding was Elizabeth 1st. The play describes the adventures of two sets of lovers as they pass through the forest outside Athens, they are misused by immortals Oberon the fairy king and puck his messenger. To get revenge on his wife Titania, Oberon misuses Bottom a labourer. The love tangles are all resolved at the end of the play when love rules all end married and happy. Shakespeare wishes his audience to enjoy the falling in and out of love of the characters. His message is that true love never runs smoothly. The theme of love is involved with all of the characters from the quarrel of Oberon and Titania, to the play Pyramus and Thisbe performed by the labourers for the wedding celebrations of Theseus and Hippolyta. ...read more.

"What angel wakes me from my bed?" Titania wakes up with the juice controlling her, she has no choice over what she is about to do. The man she loves and adores is filthy and disgusting he also has an a*s's head on his shoulders, but she still calls him an angel. Her husband must be some sad person to allow this to carry on. It seems odd that anyone would allow this to carry on seen as they are married, its also very unkind that Oberon allows his wife to find someone else attractive. While Oberon enjoys his wife' predicament he tells puck to stop Demetrias from treating Helena so badly by putting the love juice on to Demetrias eyes. If Oberon had not interfered, a lot of the play would not of happened. Shakespeare uses Oberon as the centre character around whom the story resolves. Oberon is a man of many parts. ...read more.

It is obvious that mortals suffer when these two quarrel! It is obvious they have quarrelled many times before. Titania leaves Oberon's "bed and company" we see how determined Oberon is to have the little Indian boy, his wife refuses. While angry with his wife Oberon feels sorry for Helena when he hears Demetrias treats her badly. How strange that Oberon intends to use the flower juice on his own wife to misuse and embarrass her. The swing of the emotion is typical to mood swings through the play. It is Oberon that controls the lives of the other characters and brings changes of mood and atmosphere. It is he who moves he story to a happy end. When Titania agreed to give Oberon the little Indian boy he takes the juice of her eyes. The lover's muddles are sorted out and they are happy. This is a very different Oberon from which we see at the start of the play, he is a much better person. In the same way he acts like a spoilt child. ...read more.