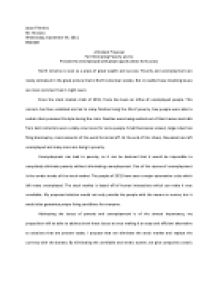 ﻿Jason Pinheiro Mr. Morano Wednesday, September 14, 2011 END2DB A Modest Proposal For Eliminating Poverty and to Provide the Unemployed with great opportunities for Success North America is seen as a place of great wealth and success. Poverty and unemployment are rarely contained in the great picture that is North American society. But in reality these troubling issues are more common than it might seem. Since the stock market crash of 2011, there has been an influx of unemployed people. This concern has then escalated and led to many families living the life of poverty. Few people were able to sustain their previous life style during the crisis. Families were being evicted out of their homes and calls from debt collectors were a daily occurrence for some people. ...read more.

I propose that we eliminate the stock market and replace the currency with the banana. By eliminating the unreliable and erratic system, we give companies a static value which altogether removes any prospect for a company to make a profit or, more importantly, a loss. This also removes much of the confusion surrounding the value of items. Items such as gasoline and gold will have static prices making it easier for families to obtain these resources. Future generations would not have to worry about house prices because my proposal would keep the house prices the same. Every person would be able to go to the store and buy food; everyone would be able to afford electricity and water. Everyone would have a place to call their home. ...read more.

This would create better foreign relations between the West and the East. As you can see, my proposal is the most logical and least time consuming. The prospect of society itself giving to the people of poverty or the government providing more benefits to small businesses allowing them to expand is simply preposterous. Mass awareness of the ongoing crisis that is poverty would take too long and would tax the minds of the North American people too much to be considered as a real option. The tennis match that is going on in congress between the Democrats and Republicans to pass the Jobs Bill will take too long. The people of society do not want to hear about poverty, they want to hear how Lady Gaga wore a dead skunk to someone?s funeral. My proposal offers the quick and easy solution to both these issues while preserving the way of life that we call Western Civilization. ...read more.