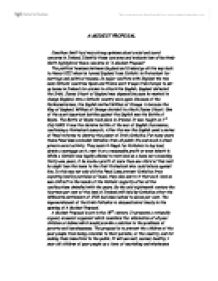 A MODEST PROPOSAL Jonathan Swift had very strong opinions about social and moral concerns in Ireland. Identify these concerns and evaluate how effectively Swift highlighted these concerns in "A Modest Proposal" The political tensions between England and Ireland go all the way back to Henry VIII when he turned England from Catholic to Protestant for marriage and political reasons. In major conflicts with England the two main Catholic countries Spain and France sent troops from Europe to set up bases in Ireland for armies to attack the English. England defeated the Irish. James Stuart of England was deposed because he wanted to change England, into a Catholic country once again. Because of the Parliamentarians, the English invited William of Orange to become the King of England. William of Orange decided to attack James Stuart. One of the most important battles against the English was the Battle of Boyne. The Battle of Boyne took place in Ireland. It was fought on 1st July 1690; it was the decisive battle of the war of English Succession, confirming a Protestant monarch. After the war the English used a series of Penal reforms to destroy the power of Irish Catholics. For many years these Penal laws excluded Catholics from all public life and much normal private social activity. ...read more.

In A Modest Proposal, the proposal is aimed at not only the children of professed beggars, but will also take into account of all infants, who are born of parents who struggle to support them. "My intention is very far from being confined to provide only for the children of professed beggars: it is of a much greater extent, and shall take in the whole number of infants at a certain age, who are born of parents in effect as little able to support them... (Paragraph 3) In A Modest Proposal, the impression we are given of a city struggling with its borders of poverty and beggars. The picture we get is one where beggars of the female s*x are followed by three or four children in squalid rags, who are forced to employ all their time in strolling or supplicating for money, and who are despised by the higher classes. "...The streets, the roads, and cabin-doors, crowded with beggars of the female s*x, followed by three or four, or six children, all in rags..." (Paragraph 1). Many of these people moved into begging not out of choice but as a result of r****t Penal Laws, which were passed by Protestants, consequently these Laws in Ireland had the effect of creating an extremely poor underclass. ...read more.

As the narrator describes it, this food will be a new source of meat compared to the meat of a sheep, cow or a pig. After analysing "A Modest Proposal" I have come to the conclusion that the author of the 18th century text shocks his audience by using irony and satire, therefore making them laugh, but also horrifying them. He uses irony in such a way that what he says makes the audience laugh. His use of irony and satire made influential people think about what was being criticised and made them aware that the conditions had to be improved. Swift uses his upper class narrator to criticise the way Ireland is being run. In A Modest Proposal the Government only seem to care about money, profit and increasing the wealth of the country. The narrator uses satire to expose the way the Government are refusing to do anything about child poverty. One of the main problems resulting from the "Penal Laws" is the economic solution of the beggars who are dying every day because they have no food; they suffer bad health and disease. Jonathan Swift wrote "A Modest Proposal" for the educated upper ruling classes. He wrote this satire to attack the upper-educated ruling classes because he wanted to expose the ruling classes reluctant to do anything serious to solve the economic crisis. The Penal Laws were eventually abolished after the satirical argument was published. ...read more.