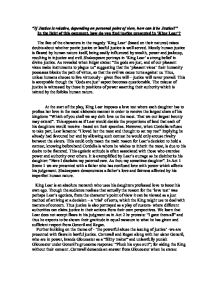 If Justice is relative, depending on personal point of view, how can it be Justice?

"If Justice is relative, depending on personal point of view, how can it be Justice?" In the light of this comment, how do you find justice presented in 'King Lear'? The fate of the characters in the tragedy 'King Lear' (based on their natures) raises doubts about whether poetic justice or lawful justice is well served. Mostly human justice is flawed by human nature itself, being easily influenced by wealth, power and jealousy, resulting in injustice and evil. Shakespeare portrays in 'King Lear' a strong belief in divine justice. As revealed when Edgar states: "the gods are just, and of our pleasant vices make instruments to plague us" suggesting that the 'pleasant vices' their humanity possesses blocks the path of virtue, so that the evil we cause turns against us. Thus, unless humans choose to live virtuously - given free will - justice will never prevail. This is acceptable though the 'Gods are just' aspect becomes questionable. The misuse of justice is witnessed by those in positions of power asserting their authority which is tainted by the foibles human nature. At the start of the play, King Lear imposes a love test where each daughter has to profess her love in the most elaborate manner in order to receive the largest share of his kingdom: "Which of you shall we say doth love us the most. ...read more.

Surely the punishment of plucking eyes out is indifferent- as according to the 'form of justice' Gloucester shouldn't have been punished at all. Thus justice appears as a play of custom for such act lays within pleasure vices the powerful take. Gloucester is easily seen as a victim of unjust as he prepared to suffocate for Lear. His honest nature would not let him stand aside and watch "[Regan's] cruel nails / Pluck out [Lear's] poor old eyes". This is shockingly portrayed as Cornwall suggests that their power can alter "form of justice": "yet our power shall do a courtesy to our wrath". The play employs poetic justice to all evil characters in the play. Yet King Lear and Gloucester suffocated more than evildoers as consequence of their misjudgments, which can be seen as harsh justice at work. "Was this a face to be oppressed against warring winds?" laments Cordelia having rescued her father from the vicious storm and wild surviving. Edgar confronts Edmund: "The dark and vicious place where thee he got. Cost him his eyes". This confrontation by both Cordelia and Edgar of their fathers' fate implies that they believe it is harsh form of justice served to them. Their forgiveness, despite rejection from their fathers in the start of the play, reflects their explicit goodness. ...read more.

Lear calls the powerful to "feel what the wretches feel". Both of those characters are exploring their humanity to 'feel for others' rather than self pity in their suffocating survival. In effect they have achieved wisdom though only in extreme suffering had they chosen to realise. Shakespeare thus shows that humans are capable of restoring human justice if they choose to think beyond themselves and particularly when they are free of vices. Cordelia's death can be viewed as a sacrifice to eliminate her father's sins in biblical perspective. Assuming that Shakespeare intended her justice to be served in heaven, poetic justice to most characters portrays that the play employs some justice. However Shakespeare seems to emphasize the effect of choices humans take over their free will. The justice served seems to agree with Edgar's statement: "our pleasant vices make instruments to plague us" as even Gloucester, whom we see as a victim of flawed human justice, had actually committed adultery which reasons to his fate. Lear, Edmund, Cornwall, Oswald, Goneril and Regan who had committed to some form of vice have all served with 'cup of their deserving' referring to Albany's comment. The play could not have absolute justice served due to too many flaws in human justice and brutality. Albany and Edgar become new agents of justice at the end of the play showing that free will can overcome darkness and restore the light. ...read more.