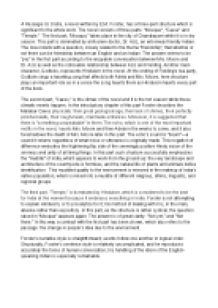 A Passage to India, a novel written by E.M. Forster, has a three-part structure which is significant to the whole work.

﻿A Passage to India, a novel written by E.M. Forster, has a three-part structure which is significant to the whole work. The novel consists of three parts: ?Mosque?, ?Caves? and ?Temple.? The first part, ?Mosque,? takes place in the city of Chandrapore while it is in dry season. This part is dominated by a Moslem doctor, Dr. Aziz, an extremely friendly Indian. The novel starts with a question, closely related to the theme ?friendship?, that whether or not there can be friendship between an English and an Indian. The answer seems to be ?yes? in the first part according to the enjoyable conversation between Mrs. ...read more.

In the introductory chapter of this part Forster describes the Marabar Caves physically: their great geological age, their lack of shrines, their perfectly polished walls, their rough-hewn, manmade entrances. Moreover, it is suggested that there is ?something unspeakable? in them. The echo, which is one of the most important motifs in the novel, haunts Mrs. Moore and then Adela in the weeks to come, and it also foreshadows the death of Mrs. Moore later in this part. The echo?s sound is ?boum??a sound it returns regardless of what noise or utterance is originally made. This negation of difference embodies the frightening flip side of the seemingly positive Hindu vision of the oneness and unity of all living things. ...read more.

Forster is not attempting to explain Hinduism, or to proselytize for it; his method of dealing with it is, in the main, allusive rather than expository. In this part, as the structure is rather cyclical, the question raised in ?Mosque? appears again. The answer is of great clarity: ?Not yet,? and ?Not there.? In this way a contrast with the first part has been shown, which also refers to the passage: the change in people?s idea due to the environment. Forster's narrative style is straightforward; events follow one another in logical order. Structurally, Forster?s sentence style is relatively uncomplicated, and he reproduces accurately the tones of human conversation; his handling of the idiom of the English-speaking Indian is especially remarkable. ...read more.