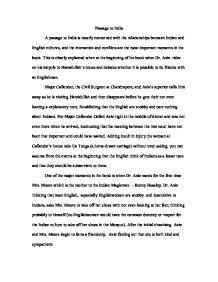 A passage to India is mostly concerned with the relationships between Indian and English cultures, and the interaction and conflicts are the most important moments in the book.

Passage to India A passage to India is mostly concerned with the relationships between Indian and English cultures, and the interaction and conflicts are the most important moments in the book. This is clearly explained when at the beginning of the book when Dr. Aziz rides on his bicycle to Hamidullah's house and debates whether it is possible to be friends with an Englishman. Major Callendar, the Civil Surgeon at Chandrapore, and Aziz's superior calls him away as he is visiting Hamidullah and then disappears before he gets their not even leaving a explanatory note. Establishing that the English are snobby and care nothing about Indians. For Major Callendar Called Aziz right in the middle of dinner and was not even there when he arrived, insinuating that the meeting between the two must have not been that important and could have waited. ...read more.

Dr. Aziz thinking that most English, especially Englishwomen are snobby and insensitive to Indians, asks Mrs. Moore to take off her shoes with not even looking at her feet; thinking probably to himself (no Englishwomen would have the common decency or respect for the Indian culture to take off her shoes in the Mosque). After the initial chastising Aziz and Mrs. Moore begin to form a friendship. Aziz finding out that she is both kind and sympathetic After there time at the Mosque Aziz escorts Mrs. Moore to the near all-white Chandrapore Club which is where Mrs. Moore had initially wondered off from. At the Club there is a showing of Cousin Kate, which is the most thoroughly English play in existence, conveying the desire of the English to recreate England in India rather than adapt to their foreign environment. ...read more.

After Adela sees how unconcerned Ronny is with the plight of the Indians she decides not to marry him. As they go for a car ride with Nawab Bahadur, which is the leading loyalist in Chandrapore, an slight accident occurs when they hit a animal and crash. They both get out and look for the injured animal but to no avail, showing Adela his kindness, Adela tells Ronny to forget what she had said and that she will marry him. In town, the Nawab Bahadur tells a group of Indians about his distress; he fears evil spirits, for when he fist bought the car, he ran over and killed a man. Dr. Aziz tells the Nawab Bahadur's grandson that the younger generation must reject such superstitions. This is showing that what all the English have brought to India is not bad for an elite have been educated and understand how the world works better than they have ever before. ...read more.