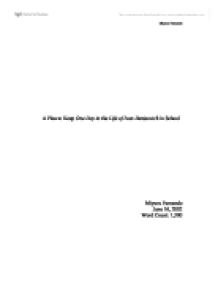 Also, to survive in the gulag, it is important to not think about pre- or post-prison life, something Shukhov desperately tries to do. This is seen when he forbids his wife from sending him any packages, but he still wishes that he would receive just one, one day. Also, once his sentence is up, Shukhov hopes to see one of the carpets he thinks about from time to time. By thinking of the good life, Shukhov is vulnerable to the hardships presented by the prison, unlike when he is working; when working, Shukhov loses all track of time and place and concentrates solely on his masonry. When thinking about packages, carpets, and other luxuries, he only wants to get out of prison more. This is his sole weakness, though, and he still manages to retain his humanity. Relative to the other prisoners, Shukhov is full of energy and life despite facing the grueling possibility of spending several more years in the gulag. He even has to suffer through "special camps" where the conditions are even worse than the other camps. Yet, Shukhov manages to take pleasure in life. ...read more.

The fish in the soup is also more bones than anything else. Finally, margara porridge is served - tasteless, boiled grass. Obviously, there is a lot to be learned from this book. By accurately portraying the prison life through the story of a fictional prisoner, and not through a textbook (for example), readers can truly get a hold of what life was like and therefore expanding their horizons. With a textbook, learning is more of a chore, but with a novel, the entertainment allows the reader to enjoy himself, passionately learning all the while in this case. In the end, I believe that you should keep One Day in the Life of Ivan Denisovich in Russia. This book is beautiful in so many ways - it illustrates the endurance of humanity, inspiring its readers to stay positive and to strive, no matter what the situation. It teaches its readers how life in a gulag during Stalin's reign was, such as the harsh weather, strict guards, and injustices. Because of this, the book acts as a reminder of our past mistakes, which we should never forget, so we do not commit such mistakes again. Thank you for your time. As Always, Ronin Tvardovsky Miyuru Fernando ...read more.