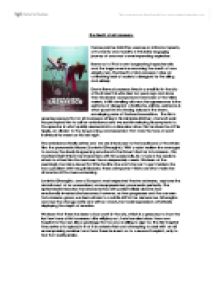 The Death of Mr Lazarescu Former painter Cristi Puiu weaves an intimate tapestry of humanity and morality in this richly engaging journey of one man's ever impending expiration. Borne out of Puiu's own burgeoning hypochondria and the tragic events surrounding the death of one elderly man, The Death of Mr Lazarescu takes an unflinching look at society's disregard for the ailing and elderly. Dante Remus Lazarescu lives in a small flat in the city of Bucharest his wife died ten years ago and since then his closest companions have been of the feline variety. A filth dwelling old man, his appearance is the epitome of disregard; a lacklustre, solitary, existence is what spurs him into finding solace in the warm, enveloping arms of the local moonshine. The film's opening scene is that of Mr Lazarescu sitting in his miniscule kitchen; stomach pain has prompted him to call an ambulance and we see him relaying his symptoms to the operator in what quickly descends into a discussion about his fondness for a little tipple, an allusion to the long running condescension that mars the face of each individual he meets on his last night. ...read more.

The resemblance to a documentary could also be attributed to the fact that the film is shot almost entirely on handheld camera, a technique that in recent years has become somewhat of a clich�, but in this context it represents a realism that would be hard to replicate with static camera shots and artsy camera angles. The absence of non-diegetic sound is also cause for pause, at first this may seem aurally striking, but realisation soon hits and you realise that you are simply listening to real life. At the third hospital, with an obvious languid approach to health care, the doctors and nurses appear more concerned with their status in the hierarchy of medical professionals, than they are about the well being of their patient. Mention the word panacea and they are likely to verbally lambaste you, inquiring as to the whereabouts of your medical degree. The paramedic Mioara is the target of such socially demoralising outbursts and we are indignant on her behalf when faced with the patronisingly youthful face of bureaucracy. The ever approaching knell nears and it is almost too easy to forget that the main protagonist, Mr Lazarescu has become little more than a prop as his level of consciousness becomes more and more debatable. ...read more.

The matter of fact approach often becomes uncomfortably intimate; when decency dictates that we look away, the subtly overwhelming emotions that are elicited by the scene almost forbid you from doing so. We are all too present as Lazarescu soils himself just as he is about to undergo a CT scan and despite the lack of coherence in his utterances he is still able to convey his needs; these simplistic observations about the fragility of the human body will leave us quietly pondering our own humanity. Puiu has attended to every detail with the eye of a painter, each stroke of the brush establishing some almost irrelevant, yet immaculately befitting details. Dante Remus Lazarescu's names are no mistake, for they encapsulate the very essence of the character's meandering journey through his own personal h**l. Though Puiu may have underpinned the narrative with some loosely veiled sarcasm, in what is likely to be a critical voice aimed at the Romanian health care system, it is however, the stark honesty of the human existence that resonates in such a depressingly accurate way; everyone's life is merely the scenic route to death. ?? ?? ?? ?? ...read more.