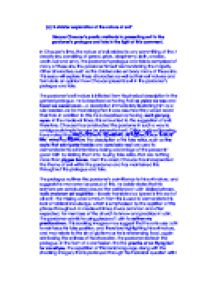 A sinister exploration of the nature of evil Discuss Chaucers poetic methods in presenting evil in the pardoners prologue and tale in the light of this comment.

(a) 'A sinister exploration of the nature of evil' Discuss Chaucer's poetic methods in presenting evil in the pardoner's prologue and tale in the light of this comment. In Chaucer's time, the nature of evil related to any committing of the 7 deadly sins, consisting of greed, pride, blasphemy, sloth, avarice, wrath, l**t and envy. The pardoner's prologue and tale is comprised of many of these sins, the pardoner himself demonstrating the majority. Other characters, such as the 3 rioters also embody many of these sins. This essay will explore these characters as well as their evil natures and formulate an opinion how Chaucer presents evil in the pardoner's prologue and tale. The pardoner's evil nature is initiated from his physical description in the general prologue. He is described as having hair as yelow as wex and hood we wered noon - a description immediately illustrating him as a rule breaker, as for most clergymen it was assumed they would cover their hair. In addition to this, he is described as having such glaryng eyen. In the medieval times, this amounted to the suggestion of evil; therefore, Chaucer has constructed the pardoner in such a way to ambiguously imply he may be somewhat evil. ...read more.

It has been suggested and argued amongst several other critics that Chaucer had no other motive when constructing the pardoner's character other than to criticize and highlight the wrongdoings of the medieval church. Many fake pardoner's lived amongst the medieval audience, and carried out the same evil methods as the pardoner, all for the same motive; greed. As a result of this, anticlericalism grew popular amongst the peasant's very quickly. Therefore, it can be suggested that the pardoner's character was constructed in such a way to shine light on his evil nature and to draw parallels with the medieval church. The pardoner's tale is a sermon against four particular sins; gluttony, blasphemy, gambling and drinking. He talks at length of each of these particular sins, giving biblical examples that he has twisted to his benefit, such as Adam and also his wyfe who were dryven for that vice. The pardoner is suggesting that gluttony was the downfall of Adam and Eve, when in fact it was temptation. To sermonize against drinking is massively ironic as the pardoner has admitted to needing a draughte before being able to think of a moral tale to tell the pilgrims - irony in itself seeing as he should not have to think about a tale of morality. ...read more.

It has long been questioned as to whether he is the personification of death himself, and therefore cannot die, or whether he is merely an instrument used to emphasise the evil nature of the three rioters. His addressing of the three rioters as sires in comparison to the rude greetings of the rioters compares and relates age and innocence; the old man may have been faithful during his lifetime and therefore God will not take his life. In contrast, the young sinful rioters quickly come to their death through their own lack of faith. To conclude, I believe that a 'sinister exploration of evil' is truly presented in the pardoner's prologue and tale. Chaucer uses characterization of the pardoner and three rioters to present how corrupt medieval society was, as well as how readily sins were committed. The pardoner's simile of as dooth a dowve sittynge on a berne to describe how he sees himself is used as an antithesis of his own character; as a dove carries religious connotations of peace and purity; the opposite to what the pardoner is. Despite infiltrating some holy and pure characters, such as the Old man, he only further emphasises the lack of good in the other characters. Overall, Chaucer constructs the prologue and tale in such a way to present several layers of evil in the Canterbury tales. ...read more.