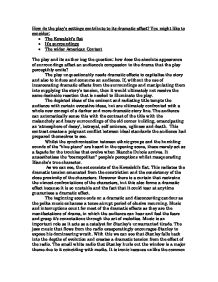 A street car named desire - How do the play's settings contribute to its dramatic effect?

How do the play's settings contribute to its dramatic effect? You might like to consider; * The Kowalski's flat * It's surroundings * The wider American Context The play and its author beg the question; how does the absolute appearance of surroundings affect an audience's compassion to the drama that the play perceptibly emits? The play unquestionably needs dramatic effects to capitalise the story and also to induce and consume an audience. If, without the use of incarcerating dramatic effects from the surroundings and manipulating them into supplying the story's tension, then it would ultimately not receive the same desirable reaction that is needed to illuminate the play. The depicted ideas of the eminent and radiating title tempts the audience with certain evocative ideas, but are ultimately confronted with a whole new concept of a darker and more dramatic story line. ...read more.

The beginning scene ends on a dramatic and disconcerting candour as the polka music enhances a tense abrupt period of elusive mourning. Music and interruptions count for most of the dramatic effects as they are the manifestations of drama, in which the audience can hear and feel the fears and grasp it's connotations through the art of melodies. Music is an important role as it acts as a catalyst for Stanley's unwarranted tirade. The jazz music that flows from the radio exasperatingly encourages Stanley to expose his domineering wrath. With this we can see that Stanley falls back into the depths of evolution and creates a dramatic tension from the effect of the radio. The small white radio that Stanley hurls out the window is a major theme due to it coinciding with media. It is ironic because unlike the common aspect of media, that holds society and communication together, it is lost through anger. ...read more.

It is consumed by absurd imitation jewelleries, trying to flaunt what is not there, creating a dramatic effect as everyone can see through this feeble disguise and unavoidably see the facility of her descent. In scene four, the early morning "confusion of street cries" reflects and increases the ebbing tension, but contrasts with the narcotic serenity that is; a new day. Scene nine is perturbed with precariously high realisations and intense dramatic tensions, due to an ingenious knit work of dramatic effects and story line. There is a critical moment when the audience captures a dramatic tension, when the shouts of an old Mexican woman selling "Flores" are heard. Blanche capitulates to her "regrets and recriminations," telling her rutted tale of sorrow with the old woman expressing her formulaic dispossessions, forming with Blanche, one speech of death. Again, the music that was ostensible throughout the scene gets vociferous with the desperate need of freedom, and the slow, blue tune sets the dramatic effect to a heart rendering misdemeanour. ...read more.