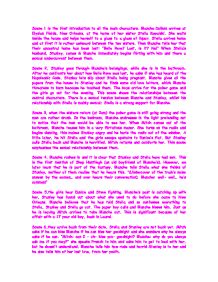 Scene 1 is the first introduction to all the main characters. Blanche DuBois arrives at Elysian Fields, New Orleans, at the home of her sister Stella Kowalski. She waits inside the house and helps herself to a glass to a glass of liquor. Stella arrives home and at first it is rather awkward between the two sisters. Then Blanche tells her that their ancestral home has been lost: "Belle Reve? Lost, is it? No!" When Stella's husband, Stanley, comes in Blanche immediately begins flirting with him and there a sexual undercurrent between them. Scene 2, Stanley goes through Blanche's belongings, while she is in the bathroom. After he confronts her about how Belle Reve was lost, he asks if she has heard of the Napoleonic Code. Stanley lets slip about Stella being pregnant. Blanche gives all the papers from the house to Stanley and he finds some old love letters, which Blanche threatens to burn because he touched them. The boys arrive for the poker game and the girls go out for the evening. This scene shows the relationships between the central characters. ...read more.

Mitch asks if he can kiss Blanche if he can kiss her goodnight and she wonders why he always asks if he can. "Mitch: can I - uh- kiss you- goodnight? Blanche: why do you always ask me if you may?" she speaks French to him and asks him to get to bed with her, but he doesn't understand. Blanche tells him how rude and horrid Stanley is to her and he also tells him of her lost love, from her youth. Scene 7, Stella tries to get Stanley to be nice to Blanche. But he has found out why Blanche had to leave her job at the school in Laurel. He tells Stella about Blanche's affair and how his father found out and wrote to the school and got her sacked. Stella tells Stanley about Blanches' marriage. When she comes out of the bathroom, Blanche knows something has been said. The atmosphere, in the tiny flat, is very tense. Scene 8, the dismal birthday tea. Mitch never turns up because Stanley told him about Blanche's past. She tries to get Stanley to tell a funny story but he gets angry when asked to help clear dishes and hurls them to the floor. ...read more.

But Stanley knows it is a lie. When Stanley is in the bathroom, she tries to call someone but is unable to. She tries again when emerges from the bathroom but he just takes the receiver. Blanche knows that he is going to do something horrible to her, so she breaks bottle top use it as a weapon. But he takes it from her. He claims that this is the date they've had set from the beginning. "Stanley: we've had this date with each other form the beginning!" Scene 11, no- one believes that Blanche was raped by Stanley because is she is insane and living in a fantasy world. Stella and Eunice are packing her trunk, while the men play poker. They have decided to put her in an institute but Blanche believes she is going on holiday with Shep Huntliegh, and she goes in to a fantasy about the seaside. The doctor and matron arrive and Blanche puts up a fight as she is confused. The doctor is kind to her and she comes out with the famous line "I have always depended on the kindness of strangers." As they take Blanche away Eunice has to hold Stella back and Blanche doesn't look back as the car drives away. ...read more.