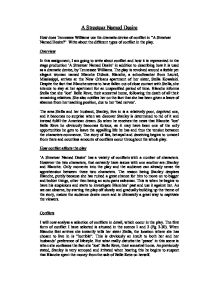 A Streetcar Named Desire How does Tennessee Williams use the dramatic device of conflict in "A Streetcar Named Desire?" Write about the different types of conflict in the play. Overview In this assignment, I am going to write about conflict and how it is represented in the stage production 'A Streetcar Named Desire' in addition to describing how it is used as a dramatic device, by Tennessee Williams. The play is revolved around a feeble yet elegant woman named Blanche Dubois. Blanche, a schoolteacher from Laurel, Mississippi, arrives at the New Orleans apartment of her sister, Stella Kowalski. Despite the fact that Blanche seems to have fallen out of close contact with Stella, she intends to stay at her apartment for an unspecified period of time. Blanche informs Stella that she 'lost' Belle Reve, their ancestral home, following the death of all their remaining relatives. She also notifies her on the fact that she has been given a leave of absence from her teaching position, due to her 'bad nerves'. ...read more.

The first form of conflict I have selected is situated in the scenes 1 and 2 (Pg 2-30). When Blanche first arrives she instantly tells her sister Stella, the location where she has chosen to live in is "horrible". This is obviously an insult to both her and her husbands' preference of lifestyle. But what really disturbs the 'peace' in this scene is when she confesses the fact she 'lost' Belle Reve, their ancestral home. As previously stated, Stanley is very annoyed and irritated when hearing this he begins to suspect that Blanche spent the money from the sale of Belle Reve on herself. Moving on to scenes 3 and 4 (Pg 31-55), Stella and Blanche return to the apartment, where Stanley is having a drunken poker game. Immediately Stanley is offensive and inconsiderate towards Blanche as soon as she comes through the door, "You could not play...." after she politely asks if she could. ...read more.

He jumps at her, grabs her arm when she swings at him, and forces her to drop the bottle. "We've had this date from the beginning," he says, and she sinks to her knees. He picks her up and carries her to the bed. The pulsing music indicates that Stanley rapes Blanche. As if this is not an astonishment in itself, what's more is that Stella refuses to believe what she is hearing and surprisingly still wants to return to Stanley. Conclusion As I intended to do I selected several forms of conflicts and described their effect on the play, as well as how it made it more enthralling. In conclusion, I feel Tennessee Williams used a great selection of conflicts in and built up the tension and atmosphere slowly but excitedly. In my opinion I enjoyed the play thoroughly and the ending was a surprising outcome, which was in no way disappointing. I liked the different forms of conflict and there were constant arguments and disputes throughout the whole play, which immersed me into it. ?? ?? ?? ?? ...read more.