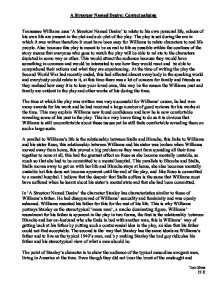 A Streetcar Named Desire: Contextualising Tennessee Williams uses 'A Streetcar Named Desire' to relate to his own personal life, echoes of his own life are present in the plot and sub-plot of the play. The play is set during the era in which it was written therefore it must have been easy for Williams to relate characters to real life people. Also because this play is meant to be as real to life as possible within the confines of the story means that everyone who goes to watch the play will be able to relate to the characters depicted in some way or other. This would attract the audience because they would have something in common and would be interested to see how they would react and be able to comprehend their actions and what they are experiencing. At the time of writing the play the Second World War had recently ended, this had affected almost everybody in the speaking world and everybody could relate to it, at this time there was a lot of concern for family and friends as they realised how easy it is to lose your loved ones, this may be the reason the Williams past and family are evident in the play and other works of his during the time. ...read more.

He had disapproved of Williams' sexuality and femininity and was openly ashamed. Williams resented his father for this for the rest of his life. This is why Williams portrays Stanley as the stereotypical 'mans man', a macho dominating figure. Williams' resentment for his father is apparent in the play in two forms, the first is the relationship between Blanche and her ex-husband who she finds in bed with another man, this is Williams' way of getting back at his father by putting such a controversial idea in the play, an idea that his father could not find acceptable. The second is the way that Stanley has the same ideals as Williams's father and to live as the typical 1940's man, and by making Stanley the bad guy ridicules his father and his stereotypical view of what a man should be. The point of Stanley's character is to show the audience of the typical masculine arrogant men, living in America at the time. Even though they did not bear the brunt of the onslaught and joined the war part way through they still seen it as America winning the day for the rest of the world. ...read more.

People like Stanley represented the new America and the new society that was being formed, on the other hand there's Blanche who is still trying to cling onto the old way of life and is very against all of the immigrants and disapproves of this new mixed society. The war also served to create a new attitude within some people because they realised how easily life comes and goes and therefore took the ideal to live life to the full as it may not be their one day. Stella and Stanley's relationship reflects this very unconcerned attitude, this is highlighted the most in the final scene when Blanche has been taken away and Stella is aggrieved, Stanley, instead of comforting her, puts his hand up her blouse. Mitch on the other hand, like Blanche, conforms more to the old fashion and conservative ideals. Williams is trying to highlight the social divide that was evident in America at that time. The r**e scene represents the battle between the old conservative ways in Blanche and the new careless ways of Stanley, new beats old in the end. Stanley represents the whole of new America showing its dominance and victory over the old America. ?? ?? ?? ?? Tom Shea 12 E ...read more.